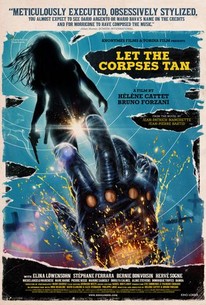 Belgian filmmakers Hélène Cattet and Bruno Forzani trade in the crushed velvet and creeping shadows of their giallo-worshiping first two films (Amer, The Strange Color of Your Body's Tears) for blistering sun, creaking leather and raining bullets in this glorious homage to 1970s Italian crime films. After stealing a truckload of gold bars, a gang of thieves absconds to the ruins of a remote village perched on the cliffs of the Mediterranean. Home to a reclusive yet hypersexual artist and her motley crew of family and admirers, it seems like a perfect hideout. But when two cops roll up on motorcycles to investigate, the hamlet erupts into a hallucinatory battlefield as both sides engage in an all-day, all-night firefight rife with double-crosses and dripping with blood. Based on a classic pulp novel by Jean-Patrick Manchette and featuring music by Ennio Morricone, Let the Corpses Tan is a deliriously stylish, cinematic fever dream that will slamfire your senses like buckshot to the brain.

Kin Is an Unsatisfying Genre Mash-Up

Let the Corpses Tan is more style than straightforward storytelling. But oh, what style...

A deluge of technique ... which washes over the viewer in successive waves, alternately breathtaking, tiresome, breathtaking, repetitive.

The second half of the movie is in near-darkness, making even the stylish visuals hard to decipher. What little interest you have in the characters is effectively extinguished as well.

Even the carnage, here, is inspired...More times than I could count I had no idea what the hell was happening, and also just didn't care that I didn't know. Let the Corpses Tan is that strange and beautiful.

While I often enjoy loud, meaningless displays of stylistic excess, this one quickly wore me down.

This is an absolutely gorgeous film, even as the characters do increasingly ugly things to each other.

Fun enough for a little bit, but eventually becomes too formless and repetitive for its own good.

Anyone who can bear to stare directly into Let the Corpses Tan may walk away with the sensation that their eyelids are burning ... that's by design.

When it comes to film formalism, I'll admit it doesn't take as much to impress me. The sheer audacity it takes for a filmmaker to imbue their film, a primarily visual art form, with stylish and meticulous flair automatically sets them in the 1% of yearly productions that elevate the craft above anything more than the mundane spectacle of computer generated commercial IPs, reboots, and prequel/sequels. Also, I'm not trying to dig on the more grounded independent productions, but there's only so many ways you can tell the same stories time and time again. As they say, there's nothing new under the sun. Barring major shifts in technology and culture, it becomes increasingly difficult to keep standard narrative and characterization fresh. Formalism is a fast way to sidestep the problem, and its quality is entirely contingent on the filmmaker's knowledge of film history and their discipline behind the lens. Hélène Cattet and Bruno Forzani, an Italian wife and husband filmmaking duo, have previously been recognized for their stunning gialli deconstruction, 2009's Amer. By playfully subverting tropes of the not-so-bygone genre with loving homage to its techniques they might not have added much to the conversation, but they have certainly put Tarantino's similar genre fetishes to shame. In Let the Corpses Tan they have managed to hybridize gialli with another great product of Italy, the spaghetti western. There are none better to fit the mood of both styles than a man who helped craft their sound, Ennio Morricone. His score here is nothing short of his best works, proving he has only gotten better with age. A group of swarthy, amoral men rob an armored truck for the many bars of gold contained therein. They hide away in the ruins of a convent inhabited by a crazy artist lady and her novelist friend. After some unexpected guests arrive, things go south quickly, and it becomes a gloriously gory shoot-em-up in the Corsican mountains overlooking the sea. All the creaking leather and practical blood splatters remind us constantly that we are rotting carcasses waiting for the flies to come down on us. Ants feature prominently in the more abstract portions of the film to bring to mind the frenetically structured pace of life amidst double crosses and love losses. Then there are these gorgeous scenes of a silhouetted woman blocking the sun with her nude visage, occasionally she is worshipped, at other times she is bound and preyed upon by a horde of men covering her in gold, simultaneously oppressing and beautifying her. This fine line of objectification and materialism might be better discussed in a classroom as it all seems to be lost among the exploitative, sensational aspects of the film. Like a Jodorowsky film, the profundity is inversely correlated to one's perceived pretension of the director. In hyper-Brechtian impulse, minute to minute updates of what time each scene is occurring break up some scenes into alternate perspectives on a single action. It seems so impractical and invasive that it could be parodical action movie pedantry to an almost annoying degree. Regardless, it manages the "shoot-out in one location" concept in a much more engaging style than Ben Wheatley's Free Fire, and some of the camera acrobatics will leave you mouth agape even if you aren't in the mood for mindless gore and psychedelic excursions. I loved it and highly recommend this as a double feature with the equally beautiful, if a bit more puerile, Mandy.