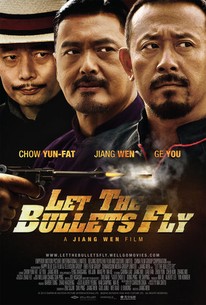 Since its release this year, Let the Bullets Fly has been lauded across the globe for its stunning mix of dark comedy and eye-popping violence. In China, this action-comedy starring Chow Yun-Fat has become the highest-grossing domestic film of all time. Set in 1920s Sichuan, the film tells the tale of the bandit "Pocky" Zhang Mazi, who poses as a local governor in a dusty town- but finds himself at odds with the local mobster, who is not eager to share his turf with another drifter. A complex and deadly series of mind-games ensues between the two crooks, which are as violent as they are hilarious. The rare foreign-language comedy that translates without a hitch, Let the Bullets Fly will have you falling out of your seat with laughter. -- (C) Variance

Yun-Fat Chow
as The Godfather

Jiang Wen
as The Governor

You Ge
as The Counselor

Carina Lau
as The Mistress

Jun Hu
as The Fake

Yun Zhou
as The Hooker

Kun Chen
as The Enforcer

Yao Lu
as The Butler

Jiang Wu
as The Martial Scholar

Bing Bai
as The Courtesan

John Do
as Number Four

Xiaogang Feng
as The Dead Counselor

Miao Pu
as The Wife
View All

Between the kung fu, the gunplay, a gentle romantic subplot and the extreme gastronomy - there's something for everyone.

This period action comedy by Jiang Wen is great fun in the Shakespearean tradition, stuffed with lively characters, dramatic stand-offs, and stolen-identity subplots.

Jiang directs with great vigor, serving up plenty of blood and a lot of laughs as he turns his picture into a propulsive blast.

See it now, uncut and in widescreen, before it disappears - and then reappears, years later, referenced in some Quentin Tarantino picture.

This is a successful comedy, but a muddled plot. If you see it, go in looking for a light and convoluted romp.

Fast, broadly funny, and violent, it's also relentless in its manipulation of audience response.

Let the Bullets Fly is an entertaining and mostly engaging entry from an intriguing director.

It's satire of sorts, but broad, confused, extremely talkative and interminable.

An outrageous, high-octane and uproariously entertaining action-packed comedy. A stylish, superbly crafted and brilliantly performed movie that has lots to offer. An utterly hilarious and fun movie that combines incredible comedy, sensational action sequences and great set pieces. A Shakespearean tradition, stuffed with lively characters, dramatic stand-offs, wonderful laughs and a great story. A masterpiece. A true work of insane remarkable art. An bullet-blasting, two hour roller-coaster ride of undeniable fun and excitement. I loved this movie. A spectacular and really funny action movie that's fierce, really cool and wildly epic. Chow Yun-Fat is truly brilliant and hilarious. Jiang Wen is outstanding. Ge You is outrageous. You, Wien and Yun-Fat play each other off wonderfully and shine with magnificent chemistry. They give some very impressive and damn near perfect performances. It`s almost too much fun to handle and even then you cant help but enjoy it. An instant classic. Director and star, Jiang Wen crafts a superb and magnetic action picture that is more than meets the eye.

Let The Bullets Fly is unusually complex for a comedy, but it's also one of the funniest movies I've seen in a long time. With a great cast of characters and lots of funny jokes it was all around just a fun experience. Let the Bullets Fly is set in China during the warring 1920s, notorious bandit chief Zhang descends upon a remote provincial town posing as its new mayor, an identity that he had hijacked from Old Tang. Hell-bent on making a fast buck, Zhang soon meets his match in the tyrannical local gentry Huang as a deadly battle of wit ensues. I really enjoyed complexity in movies, especially when it's this much fun and enjoyable. I don't think I've ever seen another comedy with so many funny and smart characters. There fun, smart, brutal, and they add more fun to the movie with each character having there own personality. Now one thing I think audiences will be disappointed in is that there isn't much violence, but I don't they'll mind with the fun they'll have watching this. The cast of this movie is well put together and they deliver great performances to get behind. Each actor felt so perfect and fit perfectly into there character and they got great comedic timing. My favorite of these performances is Yun-Fat Chow as he's pretty effective and fun in a comedic role. I will praise the few scenes of violence even though they're not long, what come afterward are always some smart humor. Now I don't know about other reviewers, but I just love the location where this was filmed. It's a beautiful country and I can't think of a better place they could have shot it. Let The Bullets Fly is a smart complex comedy with tons of hilarious jokes and tons of fun. It's a comedy unlike anything you've seen before and it'll definitely will bring enjoyment for anyone looking for a laugh.

A big sack of fun is this one, clever, funny and always enjoyable. The story comes and goes a bit too much around the middle, but the final act wraps everything so well. The commie-oriented message, our hero taking away goods from the evil capitalist bad guy and giving them to the people, acquires a more complex structure thanks to a solid script. The "people" are just as greedy as the bad guy, if not more.

Jiang Wen's Let the Bullets Fly thinks outside the box when it comes to comedic action films and that works in its favor.

Bandits taking on bandits sums up this film's story, and while it easily pushes out past 2 hours, the eccentric style and swift pacing help move this thing along. The subject matter isn't hard to follow, but the constant deception that occurs throughout the picture requires attention to keep up with what's going on. It also adds to the fun.

Let the Bullets Fly has a title that makes it sound like some sort of ultimate shooter. Well, it isn't. Yes, there are bloody moments and quite a number of guns going off, but this isn't a film that thrives on its action. If anything it is just as memorable for its witty and nicely executed dialogue.

Jiang Wen pulls double duty as director and starring as one of the main characters. Wen, along with Chow Yun-Fat, put together some solid performances as the film's leads. Chow Yun-Fat is really an enjoyable person to watch in here.

It's easy to see that time and effort were put into Let the Bullets Fly, and that's why it is a recommendable film.