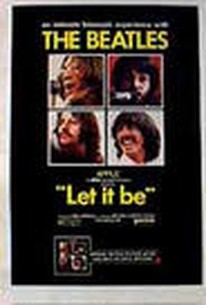 Let It Be Photos

The dissolution of the Fab Four is captured on camera in Michael Lindsay-Hogg's documentary, a filmed record of the sessions for what would become the Beatles' final release, Let It Be. (Abbey Road, cut shortly after these sessions, was in fact the group's final recording, but it was released a year before these often-delayed songs.) Included is footage shot at the famous rooftop concert that was the Fabs' final live appearance. The Beatles are shown rehearsing, performing, arguing, and recording and allow the cameras to record their every word and note in the recording studio. The film opens with Paul showing Ringo a piano composition, while the group is surrounded in silence, seemingly light years removed from the screaming hordes of fans that necessitated their withdrawal from performing live. Billy Preston later drops by to jam on keyboards. For this film, the Beatles collectively won an Oscar for "Best Original Film Score," their only Academy Award. ~ Dan Pavlides, Rovi

The Beatles
as Themselves

Yoko Ono
as Herself

Michael Lindsay-Hogg
as Himself

Billy Preston
as Himself

George Martin
as Himself

Linda McCartney
as Herself

Mal Evans
as Himself

Heather McCartney
as Herself
View All

News & Interviews for Let It Be

Total Recall: Across the Universe And The Beatles On Film

View All Let It Be News

Critic Reviews for Let It Be

Let It Be is a relatively innocuous, unimaginative piece of film.

The sycophancy of the direction notwithstanding, this survives as a fascinating record of both the Beatles' collapse and their unending power over their audience (us).

Sanitized it may well be, but agonizing nonetheless -- it's a domestic squabble that somehow touches history.

The film is a bore. It's supposed to show how the Beatles work, but it doesn't. Shot without any design, clumsily edited, uninformative and naive, it would have destroyed a lesser group.

The scenes included in the film show the four simply trying to make music, and often as not having fun doing it.

In many ways, it is the best Beatles film.

Like the album it shares a name with, the film is not all it should have been.

Phoney documentary with great music. Notable for the bits of truth that get through

Audience Reviews for Let It Be

The Beatles doing that they do best, making music. Never a bad thing.

I wouldn't be surprised if the reason why "Let It Be" is so difficult to obtain legally has something to do with Paul McCartney's awareness that he comes across as a bit of a twat in it. When he's not bullying George Harrison about his playing, he's bitching to John Lennon about Harrison's reluctance to perform in front of a live audience. There's also something cringe-making about the way in which McCartney earnestly pitches his songs ("Let It Be" and "The Long and Winding Road") straight down the barrel of the camera, while the other band members generally try to ignore the film crew. In the short-term, giving up touring in 1966 immeasurably improved the quality of both The Beatles' song-writing and their record production, but it also gave them too much free time to devote themselves to dubious religious enlightenment and naïve business ventures; in the era of Peace and Love they were a soft touch for parasitic spongers. If the formation of Apple Corps was a significant nail in the coffin of The Beatles, so too was the fact that, by stopping touring, they had effectively cut themselves off from their raison d'être: their audience. The famous rooftop concert that ends "Let It Be" is the perfect metaphor for the demise of The Beatles themselves. There they are on the roof of the Apple Building, working-class heroes turned businessmen, playing their hearts out for the public one last time - to a crowd of curious but largely unappreciative white-collar conservatives. It's a spectacle as tragic as it is uplifting.

i'm not sure i can objectively rate this but it was a joy to watch. it's alot of raw footage interspersed with amazing performances from the legends of my childhood. seeing them jam in the studio on shake rattle and roll and lawdy miss clawdy and witnessing the creation of the songs that became their last album was an emotional experience for me. it all culminates in 20 mins of the famous rooftop concert, seriously disrupting business in the street below, as some complained! i thought the touching relationship between john and paul was still quite evident here despite attempts to demonize yoko ono. this film was not easy to come by but if u get the opportunity, check it out. it's an awesome piece of rock n roll history

Let It Be Quotes