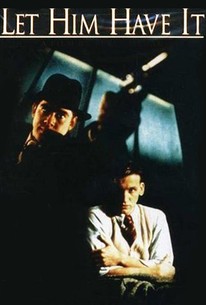 Critics Consensus: Led by a gripping performance from Christopher Eccleston, Let Him Have It sounds a compelling call for justice on behalf of its real-life protagonist.

Critics Consensus: Led by a gripping performance from Christopher Eccleston, Let Him Have It sounds a compelling call for justice on behalf of its real-life protagonist.

Critic Consensus: Led by a gripping performance from Christopher Eccleston, Let Him Have It sounds a compelling call for justice on behalf of its real-life protagonist.

Let Him Have It Photos

The Derek Bentley Case has been an uneasy blight on the British legal system since the early 1950s. Two young, frightened boys were caught by police trying to break into to a building. One of the boys had a gun. When the policeman reached out to the youth to turn over the gun, his friend shouted "Let him have it," and the policeman was killed by a gun blast. Whether the boy understood "Let him have it" to mean he should turn over the gun or to kill the police officer has been debated ever since. But the result was the 19-year-old boy was executed for the crime -- only to be posthumously exonerated in 1953. In this dark and biting film by Peter Medak, the life of Derek Bentley (Chris Eccleston) that led up to the crime is recreated in pitiful detail, as well as the ensuing trial and execution. The story begins in 1952, when the likable Bentley is released from reform school. Bentley is an impressionable young man who returns home to his loving family -- his parents (Tom Courtenay and Eileen Atkins) and sister (Clare Holman) -- but becomes involved with a group of friends, led by the intimidating Chris (Paul Reynolds), who live in the poverty of post-World War II Britain and escape their bleak world by emulating the American gangster films they see at the local cinema. They play-act at being gansters, but with real guns ... and tragic results.

Michael Elphick
as Jack the Warder

Vernon Dobtcheff
as Clerk of the Court

Joan Heal
as Lady at Butcher's

James Snell
as Man in Suit

Viv Warrentz
as Woman with Petition

Bill Dean
as Foreman on the Jury

Chris Darwin
as Owner of the Milk Bar

Micky Poppins
as Boy in Nightwatchman's Hut
View All

Critic Reviews for Let Him Have It

Courtenay slowly works his way into the center of the movie's sympathies. When he embraces his remaining family at the moment of his son's execution, his sorrow seems boundless.

As the protagonist/victim, Eccleston gives a superb, riveting performance in his feature-film debut, as does Reynolds, another newcomer who deftly handles the role of the gun-crazy and trigger-happy Chris.

Let Him Have It is unabashedly weighted toward the perspective of the murderer as victim -- a notion that does not enjoy much public currency in our more violent times. But if ever there was a victim of the judicial system, it was Derek Bentley.

The script, by Neal Purvis and Robert Wade, finds enough quirks in its protagonists to lift them above the issues-movie premise. Michael Kamen's atmospheric chamber score is also crucial to the film's success.

A chiaroscuro drama of unstoppable tragedy.

Fairness isn't the issue here, dramatic depth is: You don't have to favor capital punishment to feel yourself being manipulated.

Seen through their eyes, the story's macabre sense of social cruelty is overwhelming.

This is deeply moving, and I nearly wept.

The last 30 minutes of the story are overwhelmingly strong, blending human drama and social history into a series of extremely moving scenes, leading to a brief coda that's as unexpected and audacious as anything seen on a movie screen in years.

It's the kind of resonant, controlled and moving film that is all but unmakeable in America today. More's the shame.

Let Him Have It is strongest in the human interest department and weakest as a thriller.

It does not follow that behind every great miscarriage of justice lies a great movie. Case in point: the well-intentioned but ultimately unsatisfying Let Him Have It.

Audience Reviews for Let Him Have It

Quite a strong movie, based on a true story, highlighting miscarriage of justice.

Well made, dramatic case study of the crime, trial and subsequent execution of Derek Bentley. Director Peter Medak and a very talented cast have put together a powerful argument against capital punishment and a scathing indictment of Britain's jurisprudence.

Intelligent drama in which a mentally challenged petty criminal is railroaded onto the gallows, causing the establishment to re-evaluate it's use of the death penalty. Well acted and thought provoking.

Let Him Have It Quotes