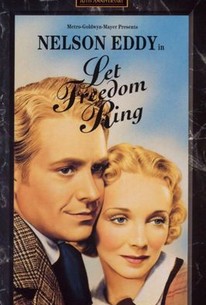 Originally filmed in Sepiatone, Let Freedom Ring is a satisfying Nelson Eddy musical with patriotic overtones. Set in the years following the Civil War, the story focuses on the battle of wills between Harvard-educated idealist Steve Logan (Eddy) and bullying railroad magnate Jim Knox (Edward Arnold). Launching a newspaper aimed at combatting Knox's engulf-and-devour tactics (could the villain be intended as a frontier Hitler?) Logan is disowned by his wealthy family and frozen out by his society friends. But with the help of woman-of-the-people Maggie Adams (Virginia Bruce), Logan sticks to his guns and perserveres. Let Freedom Ring goes out of its way to erase Eddy's "Singing Capon" image by having him engage in as much virile physical activity as possible, including a well-staged fistic bout with the gargantuan Victor McLaglen. Fey comedy relief is provided by Charles Butterworth, who does the most with the least material.

Charles Butterworth
as `The Mackerel'

Flag-waving of the George Cohan variety has always been a box-office standby, but the cinema's new patriotism goes deeper into the last refuge.

There are no featured audience reviews yet. Click the link below to see what others say about Let Freedom Ring!