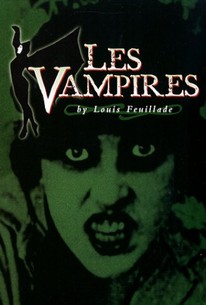 Louis Feuillade's pioneering silent serial -- whose ten episodes weigh in at nearly eight hours -- concerns Guèrande (Edouard Mathé), a journalist who is trying to uncover the truth about a mysterious society of anarchist gangsters who call themselves Les Vampires. While they don't drink the blood of the living, Les Vampires are the uncrowned monarchs of the criminal underworld, and as Guèrande struggles to learn the full extent of their lawless activities and the true identity of leaders the Grand Vampire (Jean Aymé) and Irma Vep (Juliet Musidora), he learns a tremendous amount about their intelligence, their cunning, and their treachery. A runaway hit in its initial release, which proved to be a major influence on the work of Fritz Lang and Alfred Hitchcock, Les Vampires also inspired Olivier Assayas' revisionist look at the film's leading lady, Irma Vep. ~ Mark Deming, Rovi

A few hours of it, however, was sufficient to convince this viewer that this French opposite number to The Perils of Pauline is the ultimate in cinema camp. It is a lurid, slow-moving, grotesque stretch-out of fantastic adventures.

Even at nearly eight hours, the series has ingenuity to spare.

Les Vampires, with thrill upon stunt upon criminal chicanery, is as modern as Rush Hour or The X Files.

Louis Feuillade's extraordinary ten-part silent serial of 1916, running just under eight hours, is one of the supreme delights of film.

There's a hero (a resolute reporter), but all the interest goes to Irma and Co -- their heists, their feuds with a rival gang and with the agents of law and order, all conducted by means of slaughter... on a scale and insouciance appropriate to the time.

Les Vampires is indeed one of the cinema's supreme masterpieces. That much is certain. It is more difficult to explain why.

Seemingly taking the technology and style of the day, and pushing it to its absolute max, there are aesthetic touches within this series that feel as vibrant as anything today.

It made criminal anarchy and terror into entertainment, which Feuillade made into art.

Without buildup or the slightest hint of backstory, it unleashed a succession of perturbing images and inescapable situations, which neither had nor required any justification beyond their own intensity.

There's an excitement to the action, the suspense, the gothic look and the performances that makes it far more gripping than you'd expect a 100-year-old, seven-hour film to be.

A cracking good story...in those wonderful moments where Musidora's kohl-marked face stares right out of the screen and into your soul, it's terribly perfect.

The elaborate production, written and directed by Louis Feuillade, is an epic modern crime thriller, the precursor to many of today's multi-million dollar action films.

this isn't a horror movie; it's a crime thriller. produced by gaumont to compete with the popular perils of pauline serial, it's divided into 10 parts, average 30-45 minutes. these were shown in theaters before the main feature. the story follows reporter philippe guérande's investigation of the mysterious exploits of a gang of master criminals known as les vampires. it's full of nefarious plots, disguises and daring escapes, with stunning stuntwork. musidora, a former acrobat, plays irma vep, cinema's first femme fatale, slinking around in a body stocking like catwoman. comic relief is provided by guérande's friend mazamette, who often appears to address the camera. yes it took awhile to get through, but for the most part it was highly entertaining :)