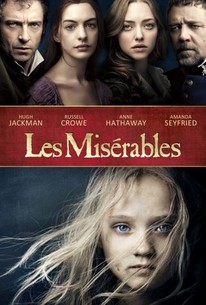 Colm Wilkinson
as Bishop
View All

It made me bad-tempered for two days, a personal record.

Like being trapped in Disney jail with the kids from Fame. For five consecutive life sentences.

This is a movie about suffering with no jagged edges.

At the end of 158 minutes, you really have experienced something. What exactly, I'm still not sure.

Tom Hooper gets a bit carried away with swoopy shots, and the close-ups are unrelenting, but crucially he lets the filth and the squalor in.

Fans of the original production, no doubt, will eat the movie up, and good luck to them. I screamed a scream as time went by.

An impressively epic screen adaptation of the smash-hit musical based on the famous book by Victor Hugo.

Epic in every sense of the word though occasionally unpolished as an uncut diamond, Les Misérables stirs the heart and soul of every musical fan.

The real stars here are Hugh Jackman and Anne Hathaway. Go to see their truly inspired portrayals, as well as the new song Suddenly.

This is the kind of show that demands to be seen live, and no amount of cinematic spectacle can replace a Broadway production.

Director Tom Hooper stays faithful to the Broadway adaptation, and for the most part it works.

Okay, don't expect West-End-quality singing, but I think the acting and cinematography do justice to the full spectrum of emotions spanned by this beloved story. I was pleasantly surprised by the gorgeous singing of Marius, Eponine, Gavroche, and Anne Hathaway was mesmerising. I forgot how much I loved Les Miserables so this gets an extra star for bringing it back to me. Keep a tall glass of water nearby, you'll need it to replenish what you lose in tears and joy.

This adaptation is grand in scale and performances but Les MisÃ (C)rables seemingly falls flat with its overwhelming use of musical dialogue. The film based on the acclaimed novel-turned-musical is catchy and beautiful at times with its tunes but the lengthy portrayal and character development (or lack thereof) doesn't help reach whatever high notes it could've potentially hit. 3/5

I'm just going to pretend that Tom Hooper won his Oscar for this and not 'The King's Speech'.

I just can't seem to get into this. The close-ups are just too much and somehow singing in this movie does not enthrall me at all. The way this was done did not translate well into film.