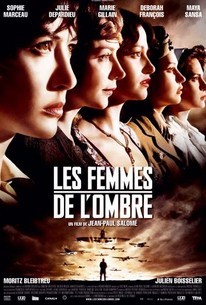 A handful of women use their smarts and allure in the service of the French Resistance in this historical drama set during World War II. Louise (Sophie Marceau) is a beautiful woman recruited into the French underground by her brother Pierre (Julien Boisselier) while Nazi forces occupy their homeland. Maurice Buckmaster (Colin David Reese) is a British agent who smuggles Louise into London to give her a special assignment -- a British scientist working with weapons research has been captured by Axis forces and is being held in a French hospital. Louise is ordered to put together a team of female resistance fighters to find the scientist and smuggle him to safety before he can be forced to tell Nazi intelligence what he knows. Louise's band of heroines includes Gaelle (Deborah Francois), who knows about demolition; Jeanne (Julie Depardieu), a streetwalker more interested in her own survival than the future of France; Suzy (Marie Gillain), a nightclub entertainer who was romantically involved with a German officer; and Maria Luzzato (Maya Sansa), a Jewish noblewoman who is on hand to help the other women when they make their way back into France. Les Femmes de l'ombre (aka Female Agents was inspired by the true story of Lise Villameur, who served with French resistance forces during the Second World War.

Wolfgang Pissors
as Médecin
View All

At no point does Female Agents begin to approach the muddy, bloody complexities of war represented by Black Book or Lust, Caution, films genuinely fascinated by the plight of women behind enemy lines.

An old-fashioned, anything-goes action movie, camouflaged by some plush European arthouse production values and some ladies who look good with weapons.

A war thriller in classic style, with superb central performances which help Female Agents rise above the awful title and keep you hooked from start to gripping finish.

Being based on facts, the story doesn't conform to a standard dramatic structure - making it even more of a nail biting experience.

Salome manages to give a sobering account of the resistance movement, as he clearly shows the cost that is paid. We warm to each of the characters as we follow the twists and turns of the complex plot that leads us through betrayals and triumphs

Salomé... struggles to resist the occupation of his film by misplaced cliché and awkward melodrama, undermining any claim to authenticity.

This war thriller is incrediblily and inspired by the multi-decorated wartime agent Lisa Villameur, director Jean-Paul Salome's beautifully nuanced film focused on the remarkable behaviour of women whose actions were often overlooked in favour of their male counterparts. The thrill is in the way Salome presents his story. This is no rose-tinted period reinvention, but an old-fashioned action film with a grim determination. These scenes are beautifully shot - watch out for the most iconic use of train steam this side of The Railway Children. From the claustrophobic nightmares of inquisition to an underground scene that's coordinated with ballet-like elegance, Salome's war is always graceful but never black-and-white.

A welcome return to those classic WW2 movies of yester years.Good build up and great tension and some good performances from the female cast.The movie felt like the old war movies i use to watched wheni was a kid and thats one of the reason i have given this movie a high score.Being a french movie and not a hollywood one you can't get any better.If you missed those war movies you you to watched treat yourself.

very impressive movie. It shows true struggling between faith and affection, choices between life and death... and it is more like a agent story than those fancy 007 kind.

It's hard to go wrong with such great source material (based on real events) and apart from the odd bit of miscasting (Moritz Bleibtreu is FAR too cuddly to play a convincing Nazi), occasional plot hole and period cliche (inevitable with such a well-familiar genre) Female Agents, on the whole, works very well. The beautiful cast, playing the (mostly) reluctant heroines, look great in a variety of costumes and disguises, glam vamp, stripper, nurse, chamber maid, Mata Hari, Nazi and so on which does teeter on the verge of being a kind of Charlie's Angles vs The Nazis - but maybe that adds to the thrill of it all. Sophie Marceau, not the most interesting of actors, does a good turn as the leader of the pack. But Julie Depardieu is much more thrilling, or maybe that's because her's is a more engaging character - I always love the tarts! The set pieces are genuinely suspenseful, bringing all the characters together, most notably the hospital and underground sequences, as events threaten to end both tragically as well as explosively. In some ways, Female Agents (who thought of that particularly uninspiring moniker??) reminded me of the macho adventure films I saw as a kid, except this time the token female roles (think Sophia Loren in 'Operation Crossbow' or Irene Papas and Gia Scala in 'The Guns of Navarone') have taken centre stage. It is everything the trailer promises: An exciting and hugely entertaining ripping yarn of gun-toting, lipsticked female spies, that is never boring but that's imperfect enough to provide the occasional unintentional titter. Thoroughly recommended.