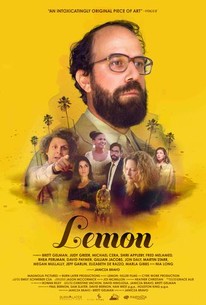 Critics Consensus: Lemon succeeds in its aim as a tart satire, but audiences may find this foray into abrasiveness too sour to swallow.

Critics Consensus: Lemon succeeds in its aim as a tart satire, but audiences may find this foray into abrasiveness too sour to swallow.

Critic Consensus: Lemon succeeds in its aim as a tart satire, but audiences may find this foray into abrasiveness too sour to swallow.

Isaac Lachmann has seen better days. His acting career is tanking, while his colleagues succeed; his blind girlfriend of 10 years plans to leave him; and his own family singles him out as a constant disappointment at their latest reunion. Even as he takes a chance on new romance, Isaac struggles to define his place in a world that has seemingly turned against him. Director Janicza Bravo (Gregory Go Boom, 2014 Sundance Film Festival Short Film Jury Award winner) returns to the Festival with her description-defying debut feature that promises to delight and unsettle audiences in equal measure with its unique brand of discomforting humor. Bravo unflinchingly strips down her stellar lead and co-writer, Brett Gelman, to appalling levels of vulnerability, emphasized by idiosyncratic supporting turns from Michael Cera, Judy Greer, Nia Long, Martin Starr, and Gillian Jacobs. Bursting with meticulous unease and loving contempt, Bravo questions what it means to truly unravel.

Hank Chen
as Lee
View All

Marvel’s The Defenders, Reefer Madness, and More on Netflix and Amazon Prime
The Hitman’s Bodyguard Misses the Mark

Be prepared for what will prove to be far and away the longest 83 minutes you'll spend watching a movie this year.

It's a case of truth in advertising.

A grating protagonist alone does not a bad film make, but the episodic, unsatisfying Lemon revels in purposeful nails-on-a-chalkboard unlikability.

[Lemon] has some legitimately peculiar traits, and moments that flash with true absurdity. But there's a flatness in the end-result. The quirky is utterly predictable.

Bravo and Gelman find a transcendent absurdity in the mundane that's awkwardly enchanting. It's more tart than sweet, but deliciously weird nonetheless.

One of the more original films in recent memory.

Lemon balances a fine line of brilliant and bizarre.

If Lemon is about one thing (and I'm not sure it is), it's about the way people demean each other to make themselves feel better.

Lemon doesn't take the easy road in any aspect of its being. It's a confrontational film willing to put the audience in a series of uncomfortable situations that only grow with each passing moment.

"Lemon" is one of the funniest, most delightfully strange movies I've seen in the past ten years. I can't wait to see what Janicza Bravo does next.

There are more cringe-inducing touches of grossness than I need, and it undermines the assured writing and character development in service of easy potty jokes.

There are no featured audience reviews yet. Click the link below to see what others say about Lemon!