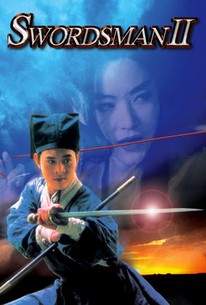 With an entirely new set of actors, this movie continues the story from Swordsman (1990). Blademaster and his martial arts school decide to retire to a distant mountain. Before leaving, he visits his friends, a tribe of snake-wielding women warriors. He finds that they have been attacked, and their leader, Princess Yin-Yin, toward whom he has some romantic feelings, has been abducted. The attacker is her evil uncle Fong, who years before overthrew Yin-Yin's father and took over their sect. Fong also has possession of a sacred scroll which tells how to achieve ultimate martial arts power. Blademaster decides to help Yin-Yin and her imprisoned father, and his romantic complications deepen when his childhood chum and Yin-Yin are joined by a new rival. Blademaster thinks she is an innocent village girl he has saved, but in fact she is Fong! The process of gaining ultimate martial arts power requires self- castration and transmogrification into female form.

Brigitte Lin
as Asia the Invincible

Camp it may be, and messy, but mundane it ain't.

For the uninitiated, much of the action might seem confusing, but for those who have a familiarity with the conventions of the genre, the film's fight scenes are a real kick, getting even wilder and wilder as the film progresses.

One of the all-time great classic Hong Kong films.

Eye candy for the sword-happy freak in you, and nothing more.

Both Jet Li and producer Hark are top notch Hong Kong film people. It's just too bad they couldn't seem to get it together this time out.

Skip the first movie and go directly for Kung Fu gold. One of Jet Li's best. Brigitte Lin steals the movie as a man transforming into a woman to gain martial arts power.

This HK movie gleefully pours a twisty plot into a sprawling, brawling spectacle of swordplay.