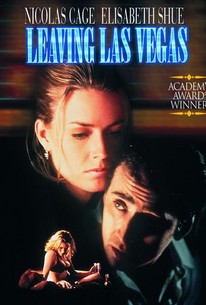 Critics Consensus: Oscar-awarded Nicolas Cage finds humanity in his character as it bleeds away in this no frills, exhilaratingly dark portrait of destruction.

Critics Consensus: Oscar-awarded Nicolas Cage finds humanity in his character as it bleeds away in this no frills, exhilaratingly dark portrait of destruction.

Critic Consensus: Oscar-awarded Nicolas Cage finds humanity in his character as it bleeds away in this no frills, exhilaratingly dark portrait of destruction.

Mike Figgis' grim drama documents a romantic triangle of sorts involving prostitute Sera (Elisabeth Shue), failed Hollywood screenwriter Ben (Oscar-winner Nicolas Cage), and the constant flow of booze which he loves more dearly than life itself. Arriving in Las Vegas with the intention of drinking himself to death, Ben meets Sera, and they gradually begin falling for one another. From the outset, however, Ben warns Sera that no matter what, she can never ask him to quit drinking, a condition to which she grudgingly agrees. A darkly comic tragedy, Leaving Las Vegas charts the brief romantic convergence of two desperately needy people who together find a brief flicker of happiness.

Stuart Regen
as Man at Bar

Vincent Ward
as Business Man No. 1

French Stewart
as Business Man No. 2

Mike Figgis
as Mobster No. 1

Waldemar Kalinowski
as Mobster No. 2

Ed Lauter
as Mobster No. 3

Mariska Hargitay
as Hooker at Bar

Danny Huston
as Barman No. 2

Tracy Thorne
as Waitress at Mall

Bob Rafelson
as Man at Mall

Michael A. Goorjian
as College Boy No. 1

Davidlee Willson
as College Boy No. 3

A love story like no other, Mike Figgis's Leaving Las Vegas is a bleak, mesmerizing rhapsody of self-destruction, defiantly uninterested in peddling Hollywood-style uplift.

Dark and giddy at the same time, Leaving Las Vegas takes us into dreamy, intoxicated places no movie about an alcoholic has gone before.

The film pulls no punches, takes no prisoners and flies in the face of feel-good pictures.

The plot goes nowhere, but under the pornographic circumstances Figgis, Cage, and Shue all do fine jobs.

It certainly has the courage of its convictions.

This movie was like watching a car crash in slow motion. You knew there was going to be a crash, but I just wished it would just happen already, and not have spent two hours getting to the impact.

What works, first and foremost, are the two lead performances.

[Shue's] terrific (and Oscar-nominated), but the movie belongs to Cage whose fierce, uncompromising performance is as serious as a hangover and as jittery as the shakes. You can practically smell the stale reek of his booze-soaked breath.

The artistic direction of Figgis keeps it honest and unsentimental.

[VIDEO ESSAY] "Leaving Las Vegas" (1995) is a remarkably potent romantic drama that permanently altered the careers of many of the people involved in its creation.

Figgis puts a desperate drunk front and center and demands we deal with him and the Jungian shadow he casts. [Blu-ray]

An awfully bleak and depressing drama that doesn't offer us any door or way in to connect with a deplorable alcoholic who only wants to die and a pitiable prostitute in need of his love - and her interview scenes are just intrusive, unnecessary and heavy-handed like most of the script.

Don't get me wrong, this film is thoroughly downbeat, however I feel alcoholism is still somewhat sugar coated. The likelihood of Ben Sanderson (Nicolas Cage) finding a woman as attractive and utterly devoted as Sera (Elizabeth Shue) is slim. It's possible of course, their bond is understandable; they're both people in grave need of care, one being a severe addict and the other being a victim on the fringe of society. Also, the crucial element that makes the relationship and indeed the film work is its platonic aberrance. Nevertheless, I thought that 'Leaving Las Vegas' is a somewhat idealised account of dire alcoholism. This really struck me in an erotically charged scene in which the pair kiss and caress each other with the help of a large bottle of liquor - it's an image that would exist merely in the dreams of most addicts. However, the engaging central romance certainly beats 2 hours of a more ordinary dive into alcoholism, which would be a film of roughly two sets: a pub and a bedroom stained with urine, excrement, blood and vomit. A film of this nature depends on a good central performance, and it gets one. Cage is depressingly real and effective as Ben. I am a fan of many of Cage's unhinged roles, however 'Leaving Las Vegas' is one the films that proves that when he moderates his idiosyncratic lunacy, he can produce genuinely good, measured performances. The film is scored with smooth, melancholic Jazz tracks and the narrative is constructed by a tautly composed prologue which gives a brief insight into Ben's life before he left for Las Vegas. This includes a brilliant scene of Ben ridding himself of his personal and professional existence to the sound of Michael McDonald's energetic 'Lonely Teardrops'. It's a scene of mixed emotions, although he is condemning himself, it is also an act of liberation. Not much detail is given about his life in the prologue, however it is clear that he was a popular and successful family man. When he is fired, his boss says with a touching sincerity 'we enjoyed having you around here, but you know how it is', giving him a cheque which Ben describes as 'too generous'. This depth given to Cage's character makes his decline all the more tragic. 'Leaving Las Vegas' is dark, seedy and tragic. Recommended.

Nick Cage loses his mind and wins an oscar...what a movie! The story and his acting blend in such a intriguing way that you have to appreciate it!