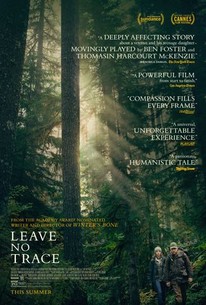 Will (Ben Foster) and his teenage daughter, Tom (Thomasin Harcourt McKenzie), have lived off the grid for years in the forests of Portland, Oregon. When their idyllic life is shattered, both are put into social services. After clashing with their new surroundings, Will and Tom set off on a harrowing journey back to their wild homeland. The film is directed by Debra Granik from a script adapted by Granik and Anne Rosellini.

Ben Foster
as Will

News & Interviews for Leave No Trace

View All Leave No Trace News

Critic Reviews for Leave No Trace

[Director Debra Granik] focuses on the humanity of the characters without ever judging them.

Granik's star-making instincts are as sharp as ever.

Occasionally uplifting and sometimes heartbreaking, it is nothing less than sublime.

Debra Granik directs with a touch that's as gentle on the audience as bees are to Tom. There is not a move, cut, sound, or deliberate stretch of silence that in some way doesn't advance and inform the plot.

It covers difficult ground, but to say it leaves no trace would be a lie. It definitely makes its mark.

Leave No Trace might be described in social terms as a film about homelessness, but it never loses sight of the fact that what makes a home is the privacy people need to connect with each other.

What I most appreciate about Granik's approach is how she eschews exposition and trusts her leads -- in this case, a terrific Ben Foster in a rare contemplative role, and knock-out New Zealand newcomer Thomasin Harcourt McKenzie.

The simple story touches on themes of trauma and loss, belonging and technology. But it does so effortlessly by focusing on a relationship between a father and daughter.

A father and daughter story of haunting beauty.

Leave No Trace finds its tension in the growing gap between father and daughter as Tom's worldview widens while Will's closes in.

Setting Leave No Trace in the wilderness allows Granik to portray an extremely enmeshed - yet, under the circumstances, healthy - father-daughter relationship.

Audience Reviews for Leave No Trace

Hmmm, it *has* been a while since I've felt An Emotionâ¢.

Focusing on a young lady (the astounding Thomasin McKenzie) who is so devoted to her father (Ben Foster) that she lives with him in the woods outside of Portland, Oregon, this is about as subtle and delicate a film about those who live outside the accepted norms as you are like ever to see, while remaining brutal and raw as truth is wont to be. Powerful storytelling here, master class stuff. Don't miss it.

Almost like a heartwarming answer to the bleak brutality of Winter's Bone, here is a delicate and touching daughter-father drama whose main strength comes from the complexity of its characters, who behave like real-life people do and are brilliantly played by Thomasin McKenzie and Ben Foster.

WAY INTO THE WOODS - My Review of LEAVE NO TRACE (4 Stars) LEAVE NO TRACE, Debra Granik's first narrative feature since her 2010 breakout WINTER'S BONE and once again co-written with Anne Rosellini, quietly came and went earlier this year but has recently re-entered the conversation with awards season nominations. How it passed me by upon initial release I can't say, but I'm glad I finally caught up with one of the year's best films. Ben Foster plays Will, who when we first meet him, lives in the woods of a state park outside Portland with his young daughter Tom (Thomasin McKenzie). Completely off the grid, they live in a tent filled with rudimentary supplies, hunting and cooking mushrooms or opening a can of soup, and sometimes venture into the city to sell Will's medications to drug dealers allowing them to purchase more supplies. With spare dialogue and astute visuals, the film slowly reveals why they've chosen this way of living. Of course, the movie wouldn't work unless obstacles and disruptions punctured their isolated existence, and when they come, it's unnervingly yet quietly suspenseful. While Will needs to live this way, Tom isn't so sure. She clearly loves and cares for her father, but she also feels drawn to the comforts of a permanent home and interactions with other people. What makes this story so memorable is the undying respect she has for Will. Lesser filmmakers and actors would have portrayed Tom as an eye-rolling, sullen teen who "But Dad's" her way through the story. McKenzie, a real find, has such poise and grace, communicating complex and contradictory feelings with a glance or humane patience with her emotionally unstable father. Foster, no stranger to these types of roles, finds the empathetic core of his character, fully convincing us that his desire to have nothing to do with other people isn't such a bad choice. It's one of his finest performances, and I thought he had topped himself with HELL OR HIGH WATER. Looking at the current situation in our country, a part of me longed to escape the way he does, but I'm not sure I could deal with the rain and the bugs. I guess being an armchair SURVIVOR viewer will have to satisfy that craving. Like WINTER'S BONE, Granik has a clear feel for rustic environments and the ability to find excitement in the quietest of moments. Spare filmmaking of this quality seems harder to pull off than a dozen superhero movies. She doesn't need people shouting at each other or big action set pieces to serve as conflict. She finds it within two very special characters who, though at cross purposes, use that rarest of attributes, kindness, to get their points across. It's sustained all the way through to its heartbreaking, devastating, but just right ending.