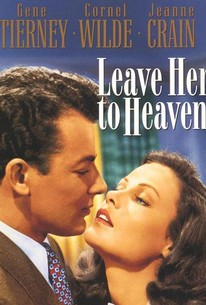 Leave Her to Heaven Photos

Ellen Berent (Gene Tierney) meets and falls desperately in love with Richard Harland (Cornell Wilde), an author who resembles her late father. Ellen is pathologically possessive of Richard, jealous of anyone who he pays the slightest attention to. In order to be completely alone with him, she convinces him to live in a isolated, but beautiful lakeside home in a spot called "Back of the Moon. " She dismisses the local handyman and then drowns his crippled half-brother Danny (Darryl Hickman). To Richard's delight, Ellen becomes pregnant. Ellen, resentful of the restriction caused by the pregnancy and afraid that she will lose some of Richard's love and attention, causes a miscarriage by throwing herself down the stairs. Ellen also becomes insanely jealous of her foster sister Ruth (Jeanne Crain), who is open and uncomplicated and soon becomes Richard's friend. Finally, Ellen confesses to Richard what she has done. Seeing his horror and revulsion and fearful of losing his love to Ruth, Ellen poisons herself and makes it look as though Ellen and Richard have murdered her. Both are tried, and Ruth is acquitted, but Richard is found guilty of being an accessory to Ellen's murder. Ruth, having come to love him, waits while he serves his prison sentence. Gene Tierney, in an Oscar nominated performance, is fascinating as the ravishing killer making Wilde and Crain seem dull by comparison. Leave Her to Heaven with its beautiful photography remains an exciting and engrossing story of obsessive love and jealousy.

Charles Tannen
as Man
View All

Critic Reviews for Leave Her to Heaven

It is a story of in-law trouble carried to awful extremes. But it is hard to work up any sustained sympathy for the uptight characters.

Gothic psychologizing melodrama, so preposterously full-blown and straight-faced that it's a juicy entertainment.

Stahl's use of space and the performances in Leave Her to Heaven...suggest he was at least the equal of the much-exalted Sirk as an artist of melodrama.

Tierney's Ellen Berent [is] one of cinema's most chilling psychopaths.

As for the brother's death, with Ellen looking on coolly in white robe and shades, it remains one of the most perturbing in the history of Hollywood.

Has emotional power in the jealousy theme but it hasn't been as forcefully interpreted by the leads as it could have been in more histrionically capable hands.

Pure modernism hiding in the guise of a classical Hollywood potboiler, a perfect cinematic embodiment of the loss and despair of the post-war moment.

[Tierney is] exceptional in the part, and far better than the legions of actresses who've subsequently set down the rolling pin and bouquet in favour of the ice pick.

The beautiful Tierney betrays her lovely countenance by playing one of the most evil creatures ever to slink across the screen.

One of the most intensely cruel and lurid film noir ever made, John Stahl's excessive melodrama features Gene Tierney in an Oscar nominated performances as a cold-blooded murderess.

Mental illness never looked so seductive or bit with such a ferocious over-bite as from Gene Tierney's demented character.

Everything is beautiful in Leave Her to Heaven. In fact, too beautiful.

Audience Reviews for Leave Her to Heaven

Gene Tierney plays the woman who's got it all ... except upstairs between her ears, and Cornel Wilde and Jeanne Crain endeavor mightily to tolerate her. They hardly can bear up. Vincent Price does a great job however as an abusive District Attorney, stealing the film. The action happens in that popular magazine cover perfect world that ruled in Hollywood film at that time. There's one scene, for instance, where Tierney, supposed pregnant (altho that's impossible to see) looks in a mirror horrified: "I look terrible," she says, when she doesn't look that way at all, when nothing in the film looks that way.

Gene Tierney's character gets my vote as the most cold-hearted, sociopathic, beautifully packaged villain to ever grace the silver screen. On a scale of pure evil she's right up there with Hannibal Lector and the shark from Jaws.

Leave Her to Heaven Quotes