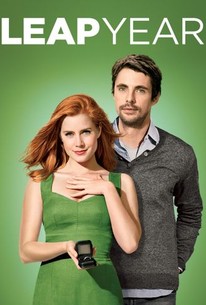 Critics Consensus: Amy Adams is as appealing as ever, but her charms aren't enough to keep Leap Year from succumbing to an overabundance of clichés and an unfunny script.

Critics Consensus: Amy Adams is as appealing as ever, but her charms aren't enough to keep Leap Year from succumbing to an overabundance of clichés and an unfunny script.

Critic Consensus: Amy Adams is as appealing as ever, but her charms aren't enough to keep Leap Year from succumbing to an overabundance of clichés and an unfunny script.

A woman (Amy Adams) heads to Ireland in order to force her boyfriend (Adam Scott) to accept her wedding proposal by scheduling it on leap day, the only time when he couldn't refuse due to the country's tradition in this Spyglass Entertainment romantic comedy. Shopgirl's Anand Tucker directs from a script by Harry Elfont and Deborah Kaplan. Matthew Goode co-stars as a handsome innkeeper who throws a wrench into the woman's plans.

Ruth McGill
as Woman in Village

Declan Mills
as Tailor
View All

Welcome another gentleman Brit to possible leading-man status in Hollywood. Everyone else involved should redact Leap Year from his or her résumé.

Amy Adams is such a likable actress that she makes the romantic comedy "Leap Year" worth watching even though we've seen it all before.

Any movie that gives Adams half a chance to show her stuff can't be dismissed out of hand. But "Leap Year" gives her slightly less than half a chance.

Adams does her level best, but her perkiness quickly wears as thin as her spiky heels on those pesky rural roads.

The film is packed with spontaneous acts of Irish country dancing and twinkly locals beaming over their Guinness. Ireland should sue.

If a worse film is released this year I'll eat my own weight in cuddly leprechauns. So I will. So I will.

Overall, Leap Year is nothing special but if you want to see an undemanding romantic comedy that will leave you with a smile on your face then it may just be worth taking the leap on this one.

If you like pat romantic comedies with paper-thin characters and recycled plots then Leap Year will entertain you.

This film is really a winner. The dialogue is clever, the acting is great, and, well, if you're looking for romance, look no further.

Leap Year may be too narrow a scenario to sustain the allegories of cultural bondage Rowe is aiming for. There's no denying, however, his eye for the bold and subtle body language of his main actress, and for evocative visuals

The bright spot in this boggy botched mess is Amy Adams, a fine and always interesting actress who sparkles and shines here despite the stilted storyline, preposterous improbabilities and an artificially sweetened storybook ending.

Good rom-com with Amy Adams and Matthew Goode that brings some laughs for there are pratfalls and other silliness. Adams really has wonderful physical comedic skills but still allows her charm to come across and make me smile. While the movie gets a little clumsy, nothing is bad enough to keep me from appreciating her. Her chemistry with Goode played well. He was fun to watch as the Irish guy who lives a casual life with no expectations and no concern for others. The Irish countryside is spectacular. The story is a variation on an old theme, but it is retold in movies because it is a good one.

Romance comedies have been bad for years, the record stands even stronger with this. Amy Adams needs to stick with movies like The Fighter, and he just needs to get in more movies PERIOD! A boring and predictable movie but I did respect the beautiful settings in Ireland, but then we get dumped back with a cliche and dumb ending where nobody even wants to stay in the theatre anymore.