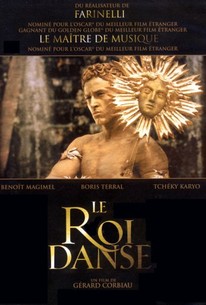 While Louis XIV had the longest reign of any French monarch and used his nation's military might to significantly expand his nation's control of Europe, he was also a noted patron of the arts with a particular love for dance, and this historical drama looks at the unlikely relationship between the King of France and noted 17th century composer Jean-Baptiste Lully. As a teenager, Louis XIV (played by Emil Tarding) was the ostensive ruler of France, but his mother Anne of Austria (Colette Emmanuelle) made most of the decisions, while Louis staged elaborate dance pieces set to the music of Lully (Boris Terral). When Lully was forced to leave Italy, he found an eager patron in young Louis, who loved his music and was fascinated by the flamboyant composer and his libertine ways. Years later, after Louis XIV had grown to adulthood, the more mature ruler (now played by Benoit Magimel) took control of France's political and military affairs, to the annoyance of the Prince de Conti (Idwig Stephane), who had been Anne of Austria's top advisor. But as Louis confronted his European neighbors, he also established a French dance academy and commissioned Lully to write a number of new dance scores. Lully's flamboyant nature and open infidelity with both men and women earned him the enmity of the more conservative members of Louis XIV's court, but the King remained Lully's champion until health problems began to affect his ability to dance -- causing him to lose interest in performance, as well as in Lully's music. Le Roi Danse also explores Lully's relationship with Jean Baptiste Poquelin Moliere, with Tcheky Karyo portraying the great playwright. ~ Mark Deming, Rovi

Colette Emmanuelle
as Anne Of Austria

Critic Reviews for Le roi danse (The King Is Dancing)

There are no critic reviews yet for Le roi danse (The King Is Dancing). Keep checking Rotten Tomatoes for updates!

There are no featured reviews for Le roi danse (The King Is Dancing) at this time.