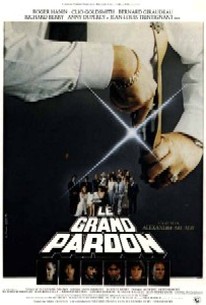 A Jewish Mafia-like family is running a prostitution ring, selling "protection," and operating gambling casinos -- more or less with impunity, and at peace with their Arab counterparts -- until a young gangster (Bernard Giraudeau) decides to pit the two ethnic factions against each other. Jewish cultural and religious events are celebrated by the Jewish gangsters, who promote family traditions -- in contrast to the police inspector who has no family and is out to do them all in. Focusing on the Jewish mob boss, the story has him undergoing some personal rehabilitation in the end. Actually, comparing the merits of ethnically and religiously different mobs of gangsters might be a little like comparing the respective beauty of a pair of week-old corpses. ~ Eleanor Mannikka, Rovi

There are no critic reviews yet for Le Grand pardon (Grand Pardon). Keep checking Rotten Tomatoes for updates!

There are no featured reviews for Le Grand pardon (Grand Pardon) at this time.