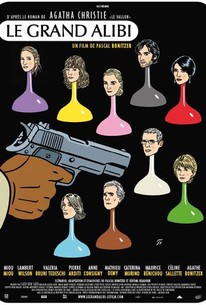 A man is shot dead, but is the woman with the gun really the killer? That's the all-important question in this thriller from France. Henri Pages (Pierre Arditi) is a successful politician who with his wife Elaine (Miou-Miou) has invited an eclectic group of guests to their country home for a weekend get-together. Joining Henri and Elaine are Pierre Collier (Lambert Wilson), a prominent psychoanalyst; his unhappy wife Claire (Anne Consigny); Pierre's lover Esther (Valeria Bruni-Tedeschi), an artist; Lea (Caterina Murino), an exhibitionistic actress who was once involved with Pierre; Philippe (Mathieu Demy), a straight-laced writer; and Marthe (Celine Sallette), a beautiful woman given to severe mood swings. Henri has a large collection of guns, and while Pierre is enjoying a swim, he's shot to death with one of the rare firearms. While Claire is holding the murder weapon when the body is found, police detective Lieutenant Grange (Maurice Benichou) isn't so certain he has an open and shut case on his hands, and begins looking into the many people who have a reason for wanting Pierre out of the picture. Grange's investigation becomes even more challenging when Lea makes it clear she's sexually attracted to him. Le Grand Alibi (aka The Great Alibi) was adapted from the novel The Hollow, a Hercule Poirot mystery by Agatha Christie.

There are no critic reviews yet for Le Grand Alibi. Keep checking Rotten Tomatoes for updates!

There are no featured reviews for Le Grand Alibi at this time.