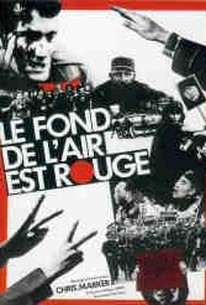 Critics Consensus: Grin Without a Cat is a 4-hour mash-up doc on civil disobedience and revolution that collides together with the same power of its recorded subjects.

Critics Consensus: Grin Without a Cat is a 4-hour mash-up doc on civil disobedience and revolution that collides together with the same power of its recorded subjects.

Critic Consensus: Grin Without a Cat is a 4-hour mash-up doc on civil disobedience and revolution that collides together with the same power of its recorded subjects.

Chris Marker's remarkable documentary about the rise and fall of the New Left in the 1960s and 1970s was originally released in 1977, but was reworked in 1993 in the wake of the Cold War's end and the collapse of the Soviet Union. A Grin Without a Cat (the idiomatic French title, Le Fond de l'Air Est Rouge, can be literally translated as "The Essence of the Air is Red") is divided into two parts. The first part, called "Fragile Hands," focuses on the emergence of leftist movements circa 1967, the Vietnam War serving as the lightning rod for radicals of all stripes to come together to agitate for their utopian dreams. The second part, entitled "Severed Hands," details the slow demise of the invigorated left, from forces within (the discord between different factions) and without (the role of the U.S. and the U.S.S.R. in keeping the countries in their backyards in line). This three-hour epic offers a stunning assemblage of period footage. For younger viewers, excerpts of iconic historical figures such as Fidel Castro, Che Guevarra, Mao Tse-tung, and Salvador Allende should be particularly eye-opening. For all its expansiveness, A Grin Without a Cat flits by with blithe disregard for the audience's level of acquaintance with the events and figures discussed. Consequently, viewers well-versed in the history of the period might find Marker's essay on the New Left more fulfilling than those without any background on the subject. ~ Elbert Ventura, Rovi

Just to take in Grin's first few moments, a mash-up of Battleship Potemkin and police whacking May '68 protesters, is to see a mind sifting through chaos and making beautiful, critical sense of it.

While it regards 1967 as the key turning point of the 20th century, and returns again and again to images of dissidents in the streets, it's alarmingly current.

A timely look back at civil disobedience, anti-war movements and the power of strong voices.

This is a movie about the world at war with itself, and the result is riveting, sublime and unforgettable.

A work of extraordinary journalism, but it is also a work of deft and subtle poetry.

The greatest documentary ever made about the struggle for socialism. The real thing, I should add, rather than the epithet applied by Glenn Beck to the Democratic Party and its leader Barack Hoover.

It's not your usual political doc.

Depending on your mood and your familiarity with international politics from 30 to 40 years ago, A Grin Without a Cat can be either talky and esoteric or haunting and prophetic.

It recreates the feel of the period, but in the end its obscurity undercuts its power.

A Grin Without a Cat plays more like a creative mix tape than a standard hunk of journalism.

There are no featured audience reviews yet. Click the link below to see what others say about Le Fond de l'air est rouge (A Grin Without a Cat) (The Base of the Air Is Red)!