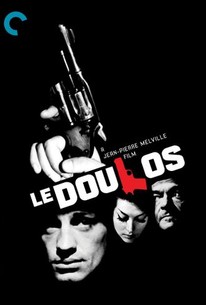 Confusion and wrong assumptions are the cause of tragedy in this stylish gangster noir by director Jean-Pierre Melville. Maurice (Serge Reggiani) and Silien (Jean-Paul Belmondo) are friends going way back, and both have had a shady past. Silien wants to leave his illegal activities behind him -- but would he actually be in league with the police, as an informer? That is what Maurice suspects after he kills a fence who is responsible for the murder of one of his friends and then takes some jewels as an extra bonus. Doubts assail Maurice as well as others until it is finally decided that something has to be done about Silien.

It's a moody, ruminative lowlife crime drama winding up with as many corpses on the floor as Hamlet, and pungent with the sweaty maleness of Melville's tough-guy pictures.

Some amazing moments, but something of a drag all told.

Does it matter that what we're seeing is not necessarily what we're getting? Not at all. The movie is entirely about how it looks and feels.

As good as Melville's setups are, the joys of the movie keep returning to Belmondo, then and now the king of effortless cool.

In its violence and speed and vigour, this absurd jungle of the imagination is more or less bound to photograph well; Melville, however, does a particularly clean job of direction.

Le Doulos is all about style and trenchcoats and hats, and, while I tend to prefer Melville's later, color films (Le Samourai, Army of Shadows, Le Cercle Rouge, Un Flic), this one is still recommended.

[A] flawed but fascinating crime thriller ...

a film whose characters & plot are concealed as much as they are revealed by the images that flicker on the screen, & whose black & white cinematography (by Nicolas Hayer) beautifully choreographs the ambiguous interchanges of clarity & obscurity.

Superbly shot in high-contrast monochrome, it unfolds in a stylised universe where character is defined by actions and costumes rather than words.

The Möbius strip of noir ambiguity, as hard and shivery and tortuous as can be

Terrific 'stylized' French noir! (Does anyone else think that Serge Reggiani looks like Mr. Bean?)

easily one of the most gripping and fulfilling films i have ever seen. the film has enough twists to fill a lifetime, shifting the direction of the characters so often to keep one glued to the story but no too often so as to confuse. a perfect blend of mystery and suspense with noir like lighting and style. one of the best crime dramas ever produced.

a fantastic heist film and the best melville i've seen to date. it's right up there with rififi and the asphalt jungle in my book. jean paul belmondo is tres cool and i never could tell which way it would turn. in beautiful black & white, simply stunning

This brilliant French film noir is one of Jean-Pierre Melville's explorations of underworld codes of honour. A disorientating examination of duplicity and false appearances, the relationships of the characters are never quite what they seem. This is exemplified by Jean-Paul Belmondo's Silien, who is dazzlingly transformed from one of the most devious, double-crossing villains of the entire film noir genre into one of its most selfless heroes, simply by Melville's clever elucidation of the true nature of the betrayal. My only criticism of the movie is that, because we find out so late in the day of Silien's struggle to reconcile his twin loyalties--to a police detective and an underworld associate: his two best friends--a fascinating aspect of the plot is downplayed in favour of the stunning but shallow twist aforementioned. Beautifully shot in black and white. As ever with Melville, don't expect a happy ending.