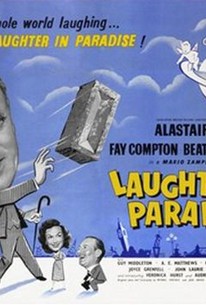 In this briskly-paced comedy a famed prankster kicks the bucket and leaves each of four relatives $140,000 on the condition that each recipient perform a special task before receiving their inheritance. He assigns his bossy, haughty sister to spend nearly a month as a maid. His cousin, a writer of pulp crime novels is assigned to spend the same amount of time in prison. The deceased tells a milque-toast bank clerk that he will not receive his portion unless he robs his employer. Finally the practical joker offers a portion to a carefree womanizer on the stipulation that he marry the first girl he meets. Released in 1951, Laughter in Paradise was Britain's top-grossing film. Watch carefully and see a young Audry Hepburn in a bit part as a cigarette girl.

Noel Howlett
as Clerk of the Court

Critic Reviews for Laughter in Paradise

An amiable if ultimately forgettable comedy.

Alastair Sim pretty much steals the picture as a writer of crime fiction who literally cannot get himself arrested.

Unfortunately, for a movie that should be chock full of such shenanigans, Laughter in Paradise pointedly avoids farce, instead taking its characters' journeys a little too seriously and producing a disappointingly tame result.

As a whole, although the script contains some genuinely amusing ideas, neither script writers nor director have achieved the pace, invention and style of high comedy.

It should have been a riot, but the zany Brit comedy is fumbled by the heavy-handed direction.

Audience Reviews for Laughter in Paradise

A quirky and charming British comedy that plays out like four stories woven into one (which pretty much hits the nail on the head). Unfortunately, woven is a bit of an overstatement because the film - despite the potential - does not screwball the stories into each other as much as it could have done. WIth a better scripwriter and finesse, this could have been a classic. This way, it feels like a below-par sitcom with easy laughts and no substance.