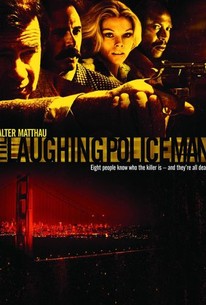 Cops Walter Matthau and Bruce Dern stalk a serial killer with a lust for bus riders in this thriller also called An Investigation of Murder.

Critic Reviews for The Laughing Policeman

It loses a great deal in the translation from Stockholm to San Francisco's Dirty Harry country. Gloomy authenticity, for one thing; pace and a genuine sense of puzzlement, for others.

After an extremely overdone prolog of violent mass murder on a bus, The Laughing Policeman becomes a handsomely made manhunt actioner.

By the end, complete with car chase and split-second shooting, the film has become indistinguishable from all those movies it's trying so hard to disown.

Though an essentially familiar amalgam of murder, manhunt and dogged police work in that scenic city, this Policeman stands a good deal taller than the norm because of the expert guidance of Stuart Rosenberg

The Laughing Policeman is an awfully good police movie: taut, off-key, filled with laconic performances. It provides the special delight we get from gradually unraveling a complicated case.

[The Laughing Policeman is] one of the most outrageous, humorless exposes on violence and homosexuality ever produced. Not to mention the fact that it was so poorly edited one could not understand the last third of the picture.

The story is a good, gripping mystery, not so much a who-done-it as a how-will-we-nail-him.

Much of the film is crude, full of "Visit San Francisco" photography and Matthau isn't on the same great form as he was as the transit cop in The Taking of Pelham One Two Three.

Although an extremely violent movie, The Laughing Policeman benefits from skillful pacing, a literate script, and fine performances by Walter Matthau and Bruce Dern.

The film is interesting for what it shows of San Francisco's undertown but its psychology is lame [and] the plot an illogical mess.

Audience Reviews for The Laughing Policeman

Stuart Rosenberg's solid, tense crime drama based on a Swedish award winning novel by Per Wahloo and Maj Sjowall, the story is transplanted from Stockholm to San Francisco. The late great Walter Matthau delivers one of his most accomplished, detailed performances, as a tough police lieutenant investigating a grisly massacre on board a city bus by a madman, who opened up with a machine gun and murdered eight people. He discovers that his former partner, a detective is one of the victims, Matthau uncovers unsavory things about his ex-partner, and that many of the victims had shady lives, which shrouds the killer's identity even more. But Matthau and his current partner, played superbly by Bruce Dern, are running out of time because the killer is getting ready to attack another city bus. Astute direction by Stuart Rosenberg, fine supporting performances by Louis Gossett Jr, Albert Paulsen, Anthony Zerbe, Anthony Costello, Val Avery, Joanna Cassidy, and Cathy Lee Crosby. Good suspense and plot twists, outstanding cinematography by David M. Walsh. A gritty period piece, and accurate 70's police procedural from the golden age of urban American films. Highly Recommended.

Whatever you're reaching for had better be a sandwich, 'cause you're gonna have to eat it.

Matthau doesn't get to play many serious roles compared to his body of work in lighter fare. This is one of his best dramatic attempts. Despite the title, not only does he not laugh in this, he never even cracks a single smile.

This is a nice murder mystery. The whole supporting cast is excellent, particulary Lou Gossett, Jr. When he delivers the line quoted above, you can feel in your bones that he means it :)