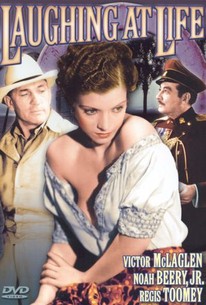 At first concentrating exclusively on westerns and serials, up-and-coming Mascot Pictures began branching out in the early 1930s with such lavish star vehicles as Laughing at Life. Victor McLaglen is in his element as a devil-may-care globetrotting adventurer named McHale. After risking his neck in WWI, the restless McHale heads to Mexico for more action. Before the film is half over, our hero is overseeing a South American revolution, and in this capacity comes face-to-face with his long-estranged son -- who, like his dad, is a thrillseeker travelling under an assumed name. The star-studded cast includes William "Stage" Boyd, Regis Toomey, Frankie Darro, Henry B. Walthall, Noah Beery Jr., J. Farrell McDonald and Lois Wilson -- many appearing in one scene each, indicating that the ever-economical Mascot studios hired these talented thespians by the day rather than the week. Also showing up uncredited is ace stuntman Yakima Canutt, doubling for Victor McLaglen in the more strenuous action scenes.

Henry B. Walthall
as President Valenzuela

J. Farrell MacDonald
as The Warden

Critic Reviews for Laughing at Life

There are no critic reviews yet for Laughing at Life. Keep checking Rotten Tomatoes for updates!

There are no featured reviews for Laughing at Life at this time.