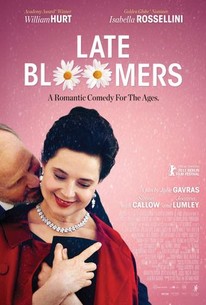 In a romantic comedy, a man and a woman love each other but everything conspires to drive them apart. Despite their true feelings, they separate now so they can be together later. The man and woman are Adam and Mary. But Mary and Adam aren‟t your typical 20 or 30-year-old couple; they‟re nearing 60. Like many 60-year-old couples of the 21st century, they‟re high functioning. And what‟s more, they do it with style. They deftly juggle children, grandchildren, work and friends, with all the joys and disappointments that come with married life. Until one day they realize, to their great surprise, they've entered the senior category. And they react to this realization in totally opposite ways. A clash soon becomes inevitable and a separation ineluctable. -- (C) Official Site

Simon Callow
as Richard
View All

It offers shallow pleasures and the satisfaction of seeing two actors in performances better than the film deserves.

I'm not sure the social prejudices Gavras tries to mine for laughs here quite exist anymore.

It's a delight to see William Hurt and Isabella Rossellini given an age-appropriate showcase that doesn't involve heavy artillery.

In a performance that is much deeper than the rest of the movie, Mr. Hurt allows Adam's anger and fear to leak out of his electric blue eyes, which are frequently on the brink of tears.

Ultimately, it's not distinctive enough to draw viewers who haven't given much thought to aging. But that still leaves a substantial audience for the film's gentle laughs and modest insights.

"Late Bloomers" could have been a much better movie, if only director and co-writer Julie Gavras were as sensible as her actors.

For a film that seemingly indicates later life epiphanies and growth, this slow going narrative offers nothing new.

Late Bloomers has its moments but mostly feels like an uncomfortable romp into old age.

A comedy about the changes and the challenges faced by a couple entering the far country of old age.

Late Bloomers is a first rate rom-com about first world problems, with two great veteran actors delivering on a witty and poignant script.

Getting old ain't fun in this dreary comedy drama.

Late Bloomers is at its best when it's being breezy and simply taking pleasure in its lead actors, who turn in strong performances in spite of certain clunky character developments.

"Late Bloomers" has a good cast, namely William Hurt and Isabella Rossellini as a married couple growing nearer to 60 while facing challenges in life, namely his struggling architecture practice and her wanting to volunteer at pretty much anything.(That's not to mention very fine support from Simon Callow and Joanna Lumley.) But the movie is so scattershot that it lacks much in the way of a consistent story, or really any kind of meaningful insights.