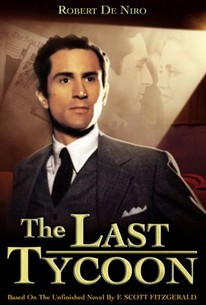 Based on an unfinished novel by F. Scott Fitzgerald adapted by the notable playwright Harold Pinter and brought to the screen by Elia Kazan, this movie explores the life and machinations of the troubled movie producer Monroe Stahr (Robert DeNiro). The real-life inspiration for the leading character was Irving Thalberg, a producer at MGM. The focus of this leisurely-paced movie is on the characters of these show-business people. This star-studded film was expected to be a more conventional drama, and was not well-received by the film-going public.

Carrie Miller
as Lady in Restaurant

Patricia Singer
as Girl on Beach
View All

Critic Reviews for The Last Tycoon

De Niro proves again how well he can carry a part, and is particularly good in scenes dealing with the day-to-day business of movie-making.

The movie is full of echoes. We watch it as if at a far remove from what's happening, but that too is appropriate: Fitzgerald was writing history as it happened.

Elia Kazan now admits that he directed this adaptation, his last Hollywood film, for the money. Unfortunately, it looks it.

It has all been put together with such taste and intelligence by Spiegel and Kazan that for all of its problems, it's probably the best all around movie from a Fitzgerald work yet made.

For the sake of Fitzgerald's memory, The Last Tycoon will be the last effort to cinematize the author.

The Last Tycoon is an intriguing entry to the period gangster genre that depicts the weight of triad influence in 1930s Shanghai at the cusp of war with an invading Japan.

It's a film that takes Hollywood too seriously and seems to worship with piety at its altar, but was too awkwardly presented to mean much.

Fitzgerald's unfinished novel transfers awkwardly to the screen but is saved from oblivion by that always-fascinating actor De Niro.

Out of place and not quite interesting enough to hold our attention, which is a disappointment, because it has many of the elements that can make for greatness.

Audience Reviews for The Last Tycoon

While itâ€™s not Elia Kazanâ€™s usual style, itâ€™s a very interesting story with a lot to offer. You can instantaneously feel that itâ€™s incomplete and fragmented, but it works with Robert De Niroâ€™s performance as Stahr. This has great performances from everyone and itâ€™s got a nice critique about Hollywood and movie making, but it never really answers any of the questions it asks. This is about as much as you can expect though, considering the circumstances, and nothing to be ashamed of.

I've read a lot of reviews that complain about this film's "glacial pace", but if I may be so bold, I think a lot of people are misplacing their criticism. If anything, the film moves forward a little too quickly and sheds some crucial character insight in the process. However, I was pleased with the movie's tonal approach of distance, and the atmosphere of quiet sadness it established. This is a withdrawn piece that speaks very little at times and expects a lot from the audience. The direction, writing and performances all serve towards its languid essence and the result is a respectably executed movie that falls short of the greatness it could have achieved. Robert De Niro's lead performance is exciting to watch - a sketch of a character with a lot of texture that we never quite get a grasp of. His brief moments with Jack Nicholson make this film worth a watch alone. Watching those two screen legends feed off each other made me a happy viewer. This isn't a film I would recommend to many people, but I enjoyed it extensively and I presume it's something I'll revisit at least once.

With a cast like this there is no way this should be the snoozefest it is. Moves at a glacial place to no real resolution.

[font=Century Gothic]In "The Last Tycoon," Monroe Stahr(Robert De Niro) is the head of production at International World Films in the 1930's, making movies to keep people's minds off the Depression. He lives for his work, spending little time outside of it, since the tragic death of his lady love about a decade before. One night, an earthquake strikes the studio while he is sleeping in his office. Out to inspect the damage, he notices two women floating by on a prop; one of whom, Kathleen Moore(Ingrid Boulting), reminds him of his lost love. Now, he is obsessed with finding her again...[/font] [font=Century Gothic][/font] [font=Century Gothic]"The Last Tycoon" is a detailed and captivating movie with a breezy tone until the final minutes when it begins to drag. The movie takes place when the studio system was at its height in Hollywood.(The casting of Robert Mitchum, Ray Milland, John Carradine and Tony Curtis acknowledges the old studio system while Theresa Russell and Anjelica Huston point towards the future. And Jeanne Moreau represents the revolutionary French New Wave.) This was at a time when for better or worse the studio boss was king and directors, actors and writers were little more than craftsmen making movies on a production line. Thankfully the movie is not nostalgiac, simply showing one way of making films. [/font]