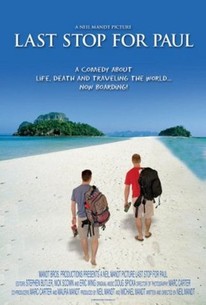 Two buddies set out on a low-budget road trip that will take them around the world in this independent comedy drama. Charlie and Cliff are two close friends who work together selling bathroom supplies. Charlie loves to travel and spends as much time as he can seeing the world on the cheap; Cliff, however, gets nervous about the prospect of going far away from home, and while he often promises to tag along with Charlie, he never does it. However, when Charlie proposes that they go to Thailand for the annual Full Moon Party, the request coincides with the passing of Cliff's old buddy Paul. Paul had been planning a global journey at the time of his death, and Cliff decides to honor his friend's wishes by scattering Paul's ashes in the four corners of the earth. With two weeks available, Charlie and Cliff set out to visit as many nations as humanly possible, scamming room and board whenever they can, and releasing a bit of Paul's remains at every stop. Shot on locations around the world with a minimal crew and locals playing themselves at most stops, Last Stop for Paul was written and directed by Neil Mandt, a veteran television producer with a background in sports programming.

Gregory Poppen
as Will

Critics Consensus: 10,000 B.C. is Primitive; Bank Gets the Job Done

This engaging, mostly improvised no-budget feature is based in part on Mandt's experiences, its loose narrative structure developing by chance as the duo encounter an assortment of characters on the road.

Well shot and edited despite its meager budget, Last Stop for Paul -- said to be based on a true story -- is good-natured, lightweight fun, although clichéd and more suited to DVD and cable than the big screen.

Simply an ingenious way of constructing a good film out of virtually nothing.

Terrifically shot, and brimming with equal parts snarky heart and the most well-duh insights since your college senior thesis.

Whatever comic misadventures he set out to commit to film on his shoestring budget, [director] Mandt proves again and again in Last Stop for Paul that he was ready when the time came.

Many of these are locals whom we see Mandt trying to teach to act in outtakes over the end credits, which are by far the best and funniest things in the movie.

Dying to see the world

The trouble is that the contrivances are so... contrived.

It's an eye-opening ride and a totally enriching experience.

What it lacks in polish it tends to make up in high spirits and good humor.

There are no featured audience reviews yet. Click the link below to see what others say about Last Stop for Paul!