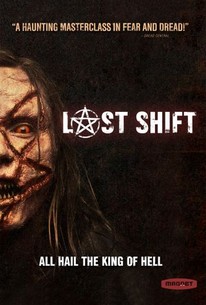 Rookie police officer Jessica Loren (Juliana Harkavy - "The Walking Dead") has been assigned the last shift at a closing police station and must wait for a hazmat crew to collect biomedical evidence. Ordered not to leave the station under any circumstance, Jessica comes to learn that it's more than just an outdated station, its home to the ultimate embodiment of evil and his devoted blood thirsty followers. Jessica is left to fend for herself in the Devil's playground.

[it] is pure genre, but that is not to say that its genre is pure, given how deftly it ambiguates itself between being a story of ghostly vengeance and a tale of psychological breakdown, while leaving the disoriented viewer to call the difference.

The film is a slow burn, DiBlasi takes his time to build of the horror sequences and it pays off. [Full review in Spanish]

One actress for most of the time, great camerawork, splendid sound design and a story that might not be all that new but it's perfectly executed. [Full review in Spanish]

Even if it's full of cliches and commonplaces for the genre, the film actually manages to surprise you and be above the average horror film. [Full review in Spanish]

a knowing and assured spin on established genre materials: an Assault on Precinct 13 by ghosts from a traumatic, Manson-esque past.

It may be hard to believe that Harkavy's character wouldn't just leave the police station under such horrific circumstances, but the actress does a great job selling us her strong perseverance in a highly creepy, low-budget horror film that offers some very disturbing moments.

Some nice scares in this low budget horror. Good script and direction and a convincing performance by Juliana Harkavy help. Marred only by a somewhat predictable ending.

In all honesty, this is actually a pretty cool little horror movie. I don't think it really does anything that's all that unique or inventive, but I think it takes a concept that might sound like it'd make for a routine, by-the-numbers horror film and it absolutely makes the most of it. It's not that I think this is one of the best horror movies of the year, but it's a pretty damn good one at its core. I know the whole concept of 'woman being driven to the brink of madness' doesn't sound interesting, per horror standards, and the payoff is pretty much exactly what you would expect, but I think the film does an excellent job at sort of building suspense and dread as the crazier things get inside the police station that's closing down. The film mixes some supernatural elements with some more violent and bloody moments. It's not that this is the first film that has done this, but it's not something that's really all that common in horror films. And it's not even like there are a bunch of deaths in the film, you're shown photos of people that were murdered by the cult, but you never actually see anyone die until much later in the film and then again during the climax. But I think the film mixes in these bloodier elements really well with the supernatural elements of the leader of this Manson-esque cult. One of the things that's really impressive about this film is the fact that it doesn't peak early without being able to recover. It's not like all the weird stuff is saved from the beginning, it's spread out throughout the film evenly and the film feels really well-paced because of it. As the film progresses, it escalates accordingly. They save the best for last and I think it works swimmingly. There's a lot of cool and creepy visuals in the film to make this, at least, somewhat scary to some people. The acting is more than solid, I think Juliana Harkavy does a good job at portraying this character who's slowly losing her mind. And the cult followers, and leader, themselves are also pretty effective at their jobs. So the acting is also good. Perhaps the story could've used some tightening up, cause I have no idea how the cult leader, wanting to be the king of hell, would need Officer Loren to achieve his goal. Like they don't do a good job at connecting the two, other than the fact that Loren's father was murdered by the cult. Other than that, like there's no real connection between Loren and the cult. They do a good job at using the cult to influence Loren's actions at the end of the film, but they don't do a good job at explaining why exactly the cult needs her in order to come back to rule earth from hell...or something. That's probably the only thing that holds the movie back, that lack of focus in explaining things and the connection Loren has with the cult. With that said, I enjoyed the movie quite a bit. It might end up fading off into obscurity, and sadly too, but I really enjoyed this film and I would definitely recommend it if you're a horror fan. It seems like a movie that would be really fun to watch with a group of friends. Good stuff here.