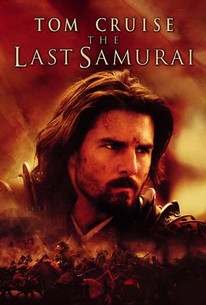 Edward Zwick returned to the director's chair for the first time since 1998's The Siege with this sweeping period drama set in 19th-century Japan. After centuries of relying on hired samurai for national defense, the Japanese monarchy has decided to do away with the warriors in favor of a more contemporary military. Tom Cruise stars as Nathan Algren, a veteran of the U.S. Civil War who is hired by the Emperor Meiji to train an army capable of wiping out the samurai. But when Algren is captured by the samurai and taught about their history and way of life, he finds himself conflicted over who he should be fighting alongside. Billy Connelly, Tony Goldwyn, and Ken Watanabe co-star. ~ Matthew Tobey, Rovi

Takashi Noguchi
as Kyogen Player No. 2

Noguchi Takayuki
as Kyogen Player No. 3

Yuki Matsuzaki
as Soldier in Street No. 1

Mitsuyuki Oishi
as Soldier in Street No. 2

Jiro Wada
as Soldier in Street No. 3

News & Interviews for The Last Samurai

View All The Last Samurai News

Critic Reviews for The Last Samurai

It's easy to stand back and wax ironic about The Last Samurai. But it's not all that difficult to succumb to its full-spirited romanticism either.

The Last Samurai is an idyll in which the savageries of existence are transcended by spiritual devotion. That's a beautiful dream, and it gives the film a deep pleasingness, but the fullness of life and its blackest ambiguities are sacrificed.

Zwick is attracted to the notions of victory in defeat and the romantic purity of self-sacrifice. His film is, however, a trifle earnest and overlong.

Disappointingly content to recycle familiar attitudes about the nobility of ancient cultures, Western despoilment of them, liberal historical guilt, the unrestrainable greed of capitalists and the irreducible primacy of Hollywood movie stars.

There are pleasures to be had in the handsome, heroic The Last Samurai. But they're all on the surface.

The breathtaking showpiece skirmishes might well suggest a Braveheart set in Japan, but there is something more going on here than merely rolling out the battles.

Mostly, though, The Last Samurai aims for, and achieves, epic sweep: the glory of tradition-bound warriors hurling themselves against the modern world, the grandeur of Hollywood offering two points of view on everything.

More than anything else, "The Last Samurai" is the current Tom Cruise vehicle, and the actor's capacity to wrestle the story to his own demands is an impressive testament to his multifaceted perfectionist skills.

Audience Reviews for The Last Samurai

I will never really understand why this powerful epic is so generally overlooked and underrated, when in fact it should be regarded as an extraordinary masterpiece about honor, love, loyalty and redemption, beautifully photographed, greatly acted and with a gorgeous score.

Sweeping and emotional. This is truly a bold, near masterpiece that just gets better with each subsequent viewing. I don't know why it's so underrated or why many dismiss it, but Edward Zwick created one of the finest modern epics with "The Last Samurai."

Almost 10 years passed between my first attempt at watching this movie and my second, and while I had rated it a 2.5 the first time around (after passing out, late at night, unwilling to invest in it), the problem wasn't the movie - it was me. I think I, like a lot of viewers, was ready to hate this film simply because Tom Cruise isn't Japanese; call it the "But I don't get it, how in the heck could HE be a Samurai!?" effect. What it is, though, is a historical epic about an American who gets a glimpse into a changing Japan. It's well shot, decently paced, and superbly choreographed - with the exception of one WWE-style body slam in the battle scene - and in the end, the only knock against it is that the premise seems rather flimsy. There's this thing called "the willing suspension of disbelief" that all art requires, though; it's not a documentary, nor was it meant to be, and if you're still hung up on factual accuracy, just watch it for Ken Watanabe's Oscar-nominated (Oscar-worthy!) supporting performance. It's basically just "Dances With Wolves: Japan," but some of us call this sort of movie "entertaining popular film." I think it's been horribly misjudged... I kind of loved it.

Its Hollywood romanticism of culture we killed at its best, with Cruise as the protagonist suddenly dubious as to which side is the right side (see:"Dances With Wolves"). Not a total waste of time, altho I wished (as I do in these films) for more time learning about the natives before they are shown up by the I'm-only-just-learning-this-stuff-but-I'm-already-better-than-you Anglo (see:"Avatar", see:"Tarzan") star.