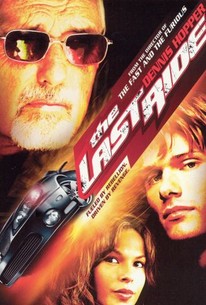 Inasmuch as the made-for-cable The Last Ride was assembled by the same folks responsible for such action films as The Fast and the Furious and XXX, one shouldn't be surprised that the picture is virtually one long thrill-packed car chase. Released from prison after three decades, modern-day outlaw Ronnie Purnell (Dennis Hopper) is determined to get even with Darryl Kurtz (Fred Ward), the cop who in 1974 put Ronnie away after a violent skirmish in which Ronnie's wife was killed. To this end, Purnell enlists the aid of his hero-worshipping grandson, Matthew (Chris Carmack), who brings along his sexy girlfriend (and ace auto mechanic) JJ Cruz (Nadine Velazquez). Wasting no time, Purnell revs up his beloved 1969 Pontiac GTO, in which he has the key to a safety deposit box containing damning evidence against Kurtz, and embarks on a spectacular crime-and-speed spree. Hoping to stop Purnell dead in his tracks is his own police officer son (and Matthew's father), Aaron Purnell (Will Patton), who had been raised by Kurtz after the arrest of his dad and the death of his mom. Described by one critic as "an 87-minute car commercial," The Last Ride originally aired June 2, 2004, on the USA cable network.

Will Patton
as Aaron Purnell

Lamar Lindsey
as Guy at Bar

Kimberly Stamphill
as Receptionist
View All

Critic Reviews for The Last Ride

There are no critic reviews yet for The Last Ride. Keep checking Rotten Tomatoes for updates!

Audience Reviews for The Last Ride

This movie had a story, a plot and some good acting. The choice the writer had for keeping the secret on the car was so unique. From the beginning to the final the action pace is unstopped, this movie provides fast and furious entertainment for action lovers. This film had a lively and atmospheric music fitting the action, plus a colorful cinematography.

An ok film produced by the director of The Fast and the Furious. There are some good chase scenes but overall it does have a TV movie feel to it and obviously endorsed by Pontiac! Might not have enough car scenes and action to keep most petrol heads happy!