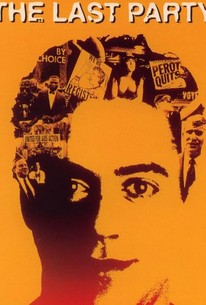 In this humorous documentary, Robert Downey, Jr. shares his views of politics, attitudes and himself while travelling across the country in 1992. He spends a special amount of time at the Democratic and Republican conventions. Downey includes brief interviews by such luminaries as Oliver Stone, Spike Lee, Jerry Falwell, and his father, Robert Downey, Sr.

Critic Reviews for The Last Party

There are no critic reviews yet for The Last Party. Keep checking Rotten Tomatoes for updates!

Audience Reviews for The Last Party

There are no featured audience reviews yet. Click the link below to see what others say about The Last Party!