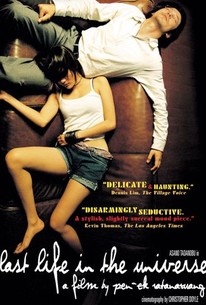 Last Life in the Universe Photos

Thai filmmaker Pen-ek Ratanaruang directs the character-driven drama Last Life in the Universe, co-written by first-time screenwriter Prabda Yoon. Kenji (Tadanobu Asano) is a Japanese man living in Bangkok. He lives a tidy, silent lifestyle fueled by the detached desire to kill himself. Meanwhile, Noi (Sinitta Boonyasak) is a pot-smoking call girl who lives in a messy house just outside Bangkok. She tries to teach herself to speak Japanese with hopes of moving to Osaka. One day, Kenji walks into his apartment as his brother Yukio (Yutaka Matsushige) is involved in a gun fight with gangster Takashi (Riki Takeuchi). Then Kenji accidentally witnesses the death of Noi's lovely sister, Nid (Laila Boonyasak), with whom he first became smitten at the library. Having nowhere to go, Kenji goes to live with Noi for a few days, leading to the development of a strange and sensitive relationship. With cinematography by Hong Kong-based photographer Christopher Doyle. Last Life in the Universe won an Upstream Prize at the 2003 Venice Film Festival.

Critic Reviews for Last Life in the Universe

It's an offbeat romance that defies easy labeling, recommendable as a film buff's pleasure and a semi-audacious art-house curio.

[Reflects] the growing interpenetration of many individual national cinemas into a cultural conglomerate that reflects the irresistible tide of cinematic globalization.

The film has a precise, slow pace that allows us to get to know these quiet, quirky characters, and an imaginatively experimental approach to their thoughts and dreams.

An absorbing series of intricately planned shots that play like installation art at a modern museum.

There is some lovely filmmaking here, and nice surprises.

The Thai locales, the stars and Doyle's expressive cinematography add up to a disarmingly seductive yet always precarious film experience.

One fascinating -- if not wholly accessible -- movie.

Macabre film about a suicidal librarian.

A film that demands second and even third viewings in order to absorb all of its nuances.

This trip-hoppy tone poem left me feeling like I'd never seen a movie before.

Audience Reviews for Last Life in the Universe

This one was quite a light film as opposed to what I was expecting. The story is odd, but not appealing enough. Slightly slowly paced, this flick is neither serious (dark and interesting) nor an out and out entertainer. Watchable, but not a must watch.

Nice dreamlike atmosphere & beautiful images by Doyle but the film suffers from overusing the indie spirit cliches, It could have been a lot better & could have had a lot more to offer

With Christopher Doyle's unrivalled cinematography this is a film that always looks good no matter what its flaws may be. A seen it before plot is handled in a much quiter than usual way. Language barriers are gradually broken down to make way for more misunderstandings in a very bittersweet film. Not particularly easy to like, it is however impossible to hate. Asano adds another fantastic credit to his filmography.

Last Life in the Universe Quotes