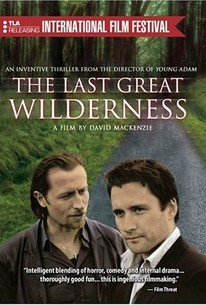 Scottish short film director David Mackenzie made his feature-film debut in 2002 with The Last Great Wilderness, the tale of two oddballs stuck in a sleepy Scottish town out in the middle of nowhere. The romantically jilted Charlie (Alastair Mackenzie) is headed to a remote location in the Highlands to burn down the house of the celebrity that stole his girlfriend away from him. On the way, he is forced to give a ride to a pseudo-Spaniard named Vincente (Jonny Phillips) who is on the run after sleeping with a violent thug's wife. En route, the car breaks down and the men are forced to stay at the Moor Lodge -- home to a group of similarly odd people that Charlie and Vince soon find themselves compelled to learn more about. The Last Great Wilderness premiered at the 2002 Edinburgh Film Festival. ~ Ryan Shriver, Rovi

A terrific example of how to make real cinema on a low budget.

There are no featured audience reviews yet. Click the link below to see what others say about Last Great Wilderness!