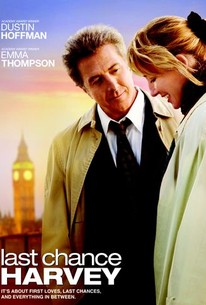 Critics Consensus: Last Chance Harvey is an above-average story that graduates to potent romantic drama based on the chemistry and charm of its top-notch performers.

Critics Consensus: Last Chance Harvey is an above-average story that graduates to potent romantic drama based on the chemistry and charm of its top-notch performers.

Critic Consensus: Last Chance Harvey is an above-average story that graduates to potent romantic drama based on the chemistry and charm of its top-notch performers.

New Yorker Harvey Shine is on the verge of losing his dead-end job as a jingle writer. Warned by his boss that he has just one more chance to deliver, Harvey goes to London for a weekend to attend his daughter's wedding but promises to be back on Monday morning to make an important meeting--or else. Harvey arrives in London only to learn his daughter has chosen to have her stepfather walk her down the aisle instead of him. Doing his best to hide his devastation, he leaves the wedding before the reception in hopes of getting to the airport on time, but misses his plane anyway. When he calls his boss to explain, he is fired on the spot. Drowning his sorrows at the airport bar, Harvey strikes up a conversation with Kate, a slightly prickly, 40-something employee of the Office of National Statistics. Kate, whose life is limited to work, the occasional humiliating blind date and endless phone calls from her smothering mother, is touched by Harvey, who finds himself energized by her intelligence and compassion. The growing connection between the pair inspires both as they unexpectedly transform one another's lives.

Tim Ahern
as Barry
View All

The problem lies in a sloppy screenplay and direction that's too slick to be credible. Added to that, while Thompson often makes acting look natural, Hoffman these days makes natural look like acting.

Nimble dialogue, a brace of insightful moments and a slightly chocolate-box view of our city, lend 'Last Chance Harvey' a warmth and wisdom which outshine the more timeworn elements of the screenplay.

Watching them dance effortlessly through this film is a reminder that two actors at the absolute top of their game can weave magic even in a slightly predictable example of a wholly formulaic genre.

This bittersweet, autumnal heartwarmer about two middle-aged people getting a last chance at love and happiness exceeded my personal tolerance factor for gloop and gush - but not by too much.

Last Chance Harvey is a funny little thing - a perfectly sincere July-to-September romance with barely an ounce of irony in its DNA, just a lot of optimism and good-humoured smiling. It's refreshing, in its unforced way.

But while the film tilts progressively further towards the chick-flick (most notably with a cliché-of-clichés trying-on-dresses-to-music scene), some witty moments make this a high-living title in a low-rent market.

The romantic comedy tends to be one of the most predictable of genres, but Last Chance Harvey has even fewer surprises than most. What it does offer, though, is the chance to watch a couple of old pros do what they do best - charm us and each other.

With a deficit of good characters, a poor script and surprisingly weak central performances, Last Chance Harvey is only for those who have run out of options at the multiplex.

The pleasure of seeing Thompson and Hoffman gamely steal scenes from one another gives the film a chance to entertain.

Maybe I'm damning with faint praise, but these are two actors I don't mind wasting time with.

To fully appreciate it, you need to be on playing-field level with Harvey and Kate. You need some miles on the love odometer.

Two of life's failures, convincingly portrayed by Hoffman and Thompson, collide in London to discover that perhaps they aren't such consummate failures after all. An actor's showcase, the leads are the workhorses that really sell this little intimate film about two people who are at the party but somehow not in it.

Last Chance Harvey is a charming, highly predictable, and impeccably acted vehicle for the charisma and chemistry of Hoffman and Thompson. Almost every scene rings truly to life, with a wry and melancholy empathy. A sixty-ish man facing total family and career meltdown, and a fifty-something old maid who has given up on love is NOT promising fare for a wide, multi-generational audience. This film will likely only appeal to viewers who have need of progressive lenses. However, the sunny sincerity and touching human moments make this film work - mostly. Viewers will need to come to the film with modest expectations - it's a comedy with very few laughs (instead it provides mostly wistful smiles), and a romantic film with no sex or even sexual tension. On the negative side, this film feels like it should have ended at the one hour mark when the family is reconciled at the wedding reception. It takes some artificial, convenient plot points like apparent heart attacks to stretch out the last half hour to any kind of complete film experience. This film is worth seeing for the performances of Hoffman and Thompson and the sensitive and well observed 'slice of life' writing. .

I actually thought this was going to be a very light, breezy comedy in the vein of Nancy Meyers, so imagine the disappointment when I find Last Chance Harvey is incredibly uncomfortable. Dustin Hoffman plays Harvey, a loser who's ignored and pushed aside at work and by his family, but he's a loser you can't root for or empathize with since he's so bitter and obnoxious. You even start to wonder if the world is just punishing him for his terrible attitude. But director and writer Joel Hopkins is a clever guy. As soon as Emma Thompson enters the picture (literally), everything changes. The mood's lighter, funnier, warmer. That's certainly a nice touch that mirrors all that Harvey feels upon meeting Kate. Last Chance Harvey also has a fantastic script and two incredible actors in the lead roles. Thompson is such an illuminating presence. I am a little biased, though; she reminds me of my mother. Hoffman's wedding speech is one of the most touching scenes I've seen in a long time. Eileen Atkins and Bronagh Gallagher are great in bit parts that offer comic relief.

Stories like this can only play out in the movies. A man goes through a life changing experience, finds love, and rights all his wrongs in the span of a few days. The plot contrivances are aplenty. But the movie isn't so bad, because Dustin Hoffman and Emma Thompson give two wonderful performances that only they could give. Before Sunrise this isn't, but it's a nice, sweet, harmlessly feel good movie that's as pleasant as afternoon tea.