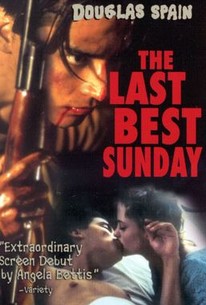 Two teenagers, each dealing with a different set of emotional burdens, find love and understanding with each other in The Last Best Sunday. Lolly Ann (Angela Bettis) is a high-school student in Pickley, a small agricultural community in California where she's growing up under the thumb of her strict, deeply religious mother (Kim Darby). Joseph (Douglas Spain), on the other hand, is struggling to get along without his parents; he came to Pickley with his family as migrant workers, but opted to stay on after his folks left so he could finish his final year of high school and earn his diploma. However, Joseph finds Hispanics are not always welcome here; a pair of bullies beat him savagely, and when he tries to get revenge, he finds town's bigoted sheriff (William Lucking) is after him. On the run, Joseph breaks into what he thinks is an empty house, only to find Lolly Ann at home while her parents are away for the weekend. Once she overcomes her initial fear and distrust, Lolly Ann finds she has a lot more in common with Joseph than she thought, and a grudging respect soon grows into affection. The Last Best Sunday was directed by Don Most, who as Donny Most is best remembered for playing Ralph Malf on the sit-com Happy Days; his former co-star Marion Ross briefly appears in a supporting role.

Peter Meyers
as Man in Bar

Sarah Nix
as Louisa
View All

A heavy-handed social conscience film, where every character is a stereotype.

There are no featured reviews for The Last Best Sunday at this time.