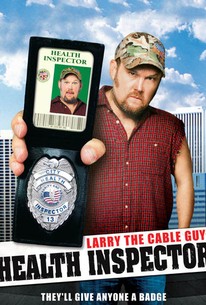 Critics Consensus: An aggressively lowbrow vehicle for its titular star, this gross-out comedy fails to "git-r-done."

Critics Consensus: An aggressively lowbrow vehicle for its titular star, this gross-out comedy fails to "git-r-done."

Critic Consensus: An aggressively lowbrow vehicle for its titular star, this gross-out comedy fails to "git-r-done."

A laid-back health inspector's comfortable routine receives an unwelcome shake up when he's assigned the task of training his new rookie partner and investigating the outbreak of a mysterious illness at one of the city's most posh restraints in this no-holds-barred comedy starring Blue Collar standup king Larry the Cable Guy. It's all greasy spoons and low-rent ethnic eateries in the world of seasoned big-city health inspector Larry (Larry the Cable Guy), and that's just the way he likes it. After begrudgingly accepting the task of training by-the-books trainee Amy (Iris Bahr), Larry lands the biggest case of his career when a group of high-class diners fall ill following a particularly pricey meal. Though the gruff but lovable health inspector soon loses his job as a direct result of his questionable manners, he soon wins the heart of a shy waitress while attempting to go undercover to crack the case and ensure that the conspirators who engineered the poisonous plan are brought to justice. ~ Jason Buchanan, Rovi

Larry The Cable Guy
as Larry

Jerry Mathers
as Himself

Kid Rock
as Himself

George Cooper
as Kid In Mall
View All

Though some of his one-liners are pretty good, his shtick can't sustain this dutifully scripted comedy.

It'd be tempting to call Larry the Ernest of his generation, but that'd be a grave insult to Jim Varney's enduring legacy.

Movies like Larry the Cable Guy: Health Inspector may be critic-proof, but even die-hard fans of country crude will have to admit that a little Larry goes a long way.

What is surprising and worth noting, though, is the quality of talent that's sadly squandered in comedian Larry the Cable Guy's feature film debut.

Unpleasant, uncouth and painfully unfunny, Larry the Cable Guy attempts lowbrow humor with neither the wit of the Farrelly brothers nor the raunchy inventiveness of Keenen Ivory Wayans.

Dumb comedy should be cited for bad taste.

At least Larry the Cable Guy's brief movie career kept Hollywood's fart-sound proprietors in business. What, you thought an opening shot of his bared plumber's crack was an arbitrary artistic decision? That there's foreshadowin' right there!

Poor Joe Pantoliano, Kid Rock, and Joanna Cassidy get mixed up in the flatulence.

It's not a movie; it's a cause for dismay.

Envision what food poisoning does to a gastrointestinal tract. Now think of that substance as fodder for the lowest aiming standup act in America.

The film is a toxic stew of stupidity that is so foul and rank that even the most forgiving fans of such corn-pone humor are liable to slink out of the theater.

Larry The Cable Guy: Health Inspector is a stupid, pointless comedy that features some very mediocre humor. The cast here are all terrible, and there's not a lot going on in this film. In fact, there's nothing interesting going on whatsoever on screen. This is a stupid, pointless film that should've never been made. Those involved should ashamed to have participated in such a train wreck of a film. This is a poorly made comedy film that relies on 10 year old style humor to "create" its "hilarious" material. Unfortunately for most viewers, fart jokes are a thing of the past. Every one involved is terrible in their roles, and this film really scraps the bottom of the barrel of comedic ideas. Larry The Cable Guy: Health Inspector is probably the worst comedy film since Biodome and Jury Duty. A pointless and failed attempt at making an audience laugh. The crude humor displayed on screen is unpleasant and unfunny. Saying that this film sucks is not enough to describe this inane and awful comedy. I hated this film, and thought it one of the worst comedies you can watch. Avoid.

Let me start off by saying that Larry The Cable Guy is my favorite comedian - nobody is funnier more often than he is. This movie's rather hit or miss though. It has its hilarious parts that'll have you laughing so hard you wake the neighbors (like when he all of a sudden has the runs and seems to ride the potty), but also many rather corny/unfunny parts. Overall average, hit or miss. I can't imagine Larry being a State employee though, or government.