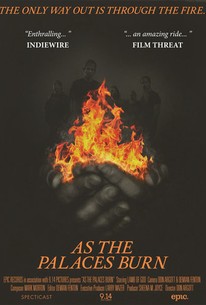 A feature-length documentary that originally sought to follow the band and their fans throughout the world, to demonstrate how music ties us together when we can't find any other common bond. However, during the filming process in 2012, the story abruptly took a dramatic turn, bringing the band into a Kafkaesque nightmare, when lead singer Randy Blythe was arrested on charges of manslaughter, blamed for the death of one of their young fans in the Czech Republic. What followed was a heart-wrenching courtroom drama that left fans, friends, and curious onlookers around the world on the edge of their seats.

Critic Reviews for Lamb Of God's As The Palaces Burn

As the Palaces Burn is a documentary on the heavy metal band Lamb of God, and obviously a must for their fans.

Don Argott's documentary about the heavy-metal band Lamb of God would have been a conventional rock doc if it had not been for a tragic incident at one of the band's concerts in Prague in 2010.

[Blythe is] a performer desperate to prove his emotions are for real.

You don't need to like Lamb of God's music - although, for the record, you should because it's awesome - to walk away from As the Palaces Burn feeling genuinely fond of the band.

It's only mildly interesting unless you're one of the band's many rabidly loyal fans, especially since Argott, clearly thoroughly embedded, chooses not to dig very deep into the personalities and issues around the incident.

It's a weird little hybrid movie. It becomes unforgettable at just the point where you were beginning to forget it.

Metal music may remain a stigmatised subculture, but As the Palaces Burn proves that there's more tender humanity coursing through its artists and supporters than what the stereotypes imply.

Even if you hate the music, there's much here to impress.

For fans of Lamb of God, or metal in general, this is essential viewing.

An entertaining and insightful rockumentary that quickly turns into a nail-biting legal thriller after the lead vocalist is arrested and accused of manslaughter during filming.

A fly-on-the-wall look at the band that will thrill fans but may not convert too many non-believers.

Audience Reviews for Lamb Of God's As The Palaces Burn

There are no featured audience reviews yet. Click the link below to see what others say about Lamb Of God's As The Palaces Burn!

Lamb Of God's As The Palaces Burn Quotes