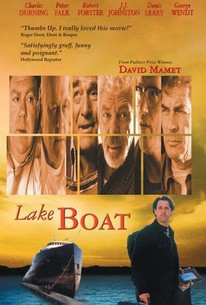 Critics Consensus: Though not much happens plot-wise, Lakeboat still has a lot to offer for fans of Mamet.

Critics Consensus: Though not much happens plot-wise, Lakeboat still has a lot to offer for fans of Mamet.

Critic Consensus: Though not much happens plot-wise, Lakeboat still has a lot to offer for fans of Mamet.

Renowned character actor Joe Mantegna makes his directorial debut with this film adaptation of one of David Mamet's first plays, boasting such onscreen talent as Peter Falk, Charles Durning, and Robert Forster. Based on Mamet's experiences of working on Great Lake freighters while a grad student, the film centers on Dale (Tony Mamet, David's brother), an Ivy League college kid working on the Seaway Queen on an internship one summer. Though his romantic vision of life on the sea is soon dashed, he befriends a half-dozen members of the world-weary crew and learns about the unexpectedly rich -- and occasionally tragic -- lives they lead. This film premiered at the 2000 Los Angeles Independent Film Festival.

Based on Mamet's experience as a freighter on the Great Lakes while a grad English lit student, Mantegna's screen version is so dramatically inert and artistically shapeless resulting in an uninvolving memory film.

Watching it, you come to understand what it is that Mamet has been true to all these years.

As drama, it's not much; as a meditation on language and storytelling, it's a treat.

A first-rate movie made from one of David Mamet's lesser plays.

Where Mantegna succeeds is in providing a forum for some great acting.

Lakeboat requires its audiences to embrace it as lovingly as Mamet and Mantegna embrace its men, but it's a lot to ask.

This plotless film is filled with a zillion little nostalgia stories that are both pointless and irritating, but some stories can also be devilishly charming.

Mamet's fixation on language is ... more effective onstage than onscreen, where the technical and visual requirements distract from the sounds of the words -- the heart of Mamet's work.

Mamet knows people so well that you can forgive his lack of actual story once in awhile.

For the most part a lot of fun, with some fine performances from a mature cast.

Viewers learn that these salty guys have salty imaginations and that Mamet's a master at capturing their thoughts in discursive detail.

There are no featured reviews for Lakeboat at this time.