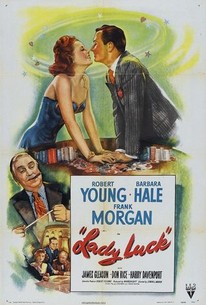 Barbara Hale landed her first A-picture starring role in the engaging romantic comedy Lady Luck. Hale is cast as Mary Audrey, the descendant of a long line of professional gamblers. Haughtily turning up her nose at the "family business," Mary spends most of her time keeping her poker-happy grandfather William (Frank Morgan) from losing his shirt. In spite of herself, Mary falls in love with another gambler, Larry Scott (Robert Young), but only after he promises to reform. Naturally he doesn't, compelling Mary to leave him on their honeymoon, thereby setting the stage for all the comic complications to follow. By film's end, Mary herself has caught the gambling bug, forcing Grandpa William and husband Larry to straighten her out! ~ Hal Erickson, Rovi

Frank Dae
as Man in Hallway

Cosmo Sardo
as Barber
View All

The story, which is spiced by the Las Vegas backgrounds, is amusing but over-anxious in repeated detail.

There are no featured reviews for Lady Luck at this time.