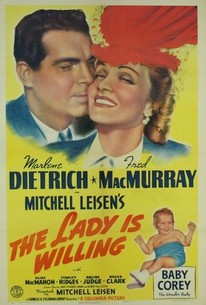 The Lady Is Willing Photos

Mitchell Leisen directed this romantic comedy with melodramatic overtones, starring Marlene Dietrich in a sympathetic role as famed stage star Elizabeth Madden. Elizabeth longs for motherhood but has no husband. Her desire appears to be fulfilled when she finds an abandoned baby, but she doesn't have a clue on how to raise it. She finds divorced pediatrician, Dr. Corey McBain (Fred MacMurray), to help her with the child. Elizabeth names the child after him and makes Corey an offer. Since she's single, she cannot adopt the child. But if Corey would marry her in name only, she could be the adopted mother and Corey could stay in a section of her apartment where she would support his research. Corey agrees to the deal, but it's not too long before Corey and Elizabeth fall in love.

Critic Reviews for The Lady Is Willing

A comedy full of charm, featuring Marlene Dietrich with an exquisite delicateness and a certain naivety of good taste. [Full Review in Spanish]

A tedious mixture of crass melodrama and heavy-handed comedy.

Audience Reviews for The Lady Is Willing

Engaging comedy with Fred and Marlene well matched and looking glamorous. As is usual Marlene is gowned in one eye popping creation after another. The picture takes an unnecessary detour into melodrama towards the end but snaps out of it for the proper ending. A cute and frothy film with Aline MacMahon contributing a fun performance as Marlene's right hand woman.

Marlene Dietrich is the 'ditsy' actress who swipes (kidnaps) an abandoned infant only to discover that she can't keep the baby unless she's married. In walks a handsome pediatrician [Fred MacMurray] and soon a plan is conceived that involves a marriage of convenience and a few hundred white rabbits.

The Lady Is Willing Quotes