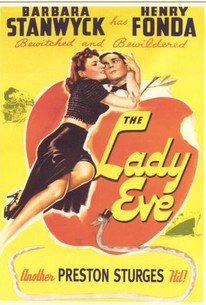 In Preston Sturges' comedy, Henry Fonda stars as Charles Pike, the son of a beer magnate who becomes the target of the father-daughter team of card sharps 'Colonel' Harry and Jean Harrington (Charles Coburn and Barbara Stanwyck). Their plan to rob the naive young man blind hits a snag, however, when Jean actually falls head over heels for an equally-smitten Pike.

Sam Ash
as Husband on Boat

Wilson Benge
as Butlers at Party

Eva Dennison
as Mother on Boat

Helen Dickson
as Mother on Boat

Betty Farrington
as Mother on Boat

Jack Richardson
as Father of Girl on Boat

Harry Depp
as Man With Glasses on Boat

Esther Michelson
as Wife on Boat

Robert Dudley
as Husband on Boat

Wanda McKay
as Daughter on Boat

Arthur Hoyt
as Lawyer at Telephone in Pike's Office

Ella Neal
as Daughter on Boat

Joe North
as Butler at Party

Cyril Ring
as Husband on Boat

Harry A. Bailey
as Lawyer in Pike's Office

Almeda Fowler
as Mother on Boat
View All

News & Interviews for The Lady Eve

View All The Lady Eve News

Critic Reviews for The Lady Eve

Written and directed by Preston Sturges, the film will please many and disappoint some.

Fine comedy in an exciting tempo, but with slapstick that should give it popular.

Stanwyck completely upstages Fonda who looks as delicate as a Lalique vase. Her chemistry is more with the dads: with Coburn and Pallette. She is the real thoroughbred.

Barbara Stanwyck is the sexiest con woman ever captured on film.

Third writer-director effort of Preston Sturges [from a story by Monckton Hoffe] is laugh entertainment of top proportions with its combo of slick situations, spontaneous dialog and a few slapstick falls tossed in for good measure.

It has a style and wit rarely seen today, while having all the slapstick you could ask for in a screwball comedy.

The Lady Eve has some cracks for the sophisticated, situations that are both salty and saucy, and a winning disregard for the Hollywood approach.

It is one of the neatest comedies the screen has offered in a long time, both from the point of view of originality in theme and performance.

From now on, it is almost an imperative to keep an eye peeled for pictures with the Sturges touch.

Mr. Sturges is clearly a good showman. Later in the film he fortunately reveals himself as something even more important -- a gay screen-writer and an imaginative director.

Audience Reviews for The Lady Eve

With a perfect balance between farce, screwball, slapstick, romance and even suspense, this is a witty comedy that relies on a delightful dialogue (which should be considered one of the finest ever written) and a wonderful chemistry between Barbara Stanwyck and Henry Fonda.

Barbara Stanwyck exudes enough sexuality to spark a fence post. I don't think I've ever seen a film with such perfect casting. Hilarious and brilliant.

An unusual romantic comedy, it's really funny, and has a good cast. Really worth watching.

Hah! Delightful!! I'm not sure who was the bigger scene stealer, Barbra Stanwyck or Henry Fonda, I loved them both. Fonda was sweet and naive while Stanwyck was closer to her Ball of Fire role, witty and fiery and perfect! The story lagged a bit here and there, but the humor kept me going.