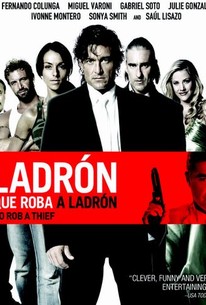 Two crack thieves, Emilio and Alejandro, reunite to rob the biggest thief they know--Moctesuma Valdez, a TV infomercial guru who's made millions selling worthless health products to poor Latino immigrants. Valdez's empire is next to impossible to infiltrate. But Emilio and Alejandro know if they go undercover as day laborers - chauffeurs, gardeners, maids, and repairmen--they can rob Valdez blind right under his nose. It's a perfect plan... except that no one on their team wants the job. Refusing to give up, Emilio and Alejandro come up with a solution so insane it might just work--use real day laborers. Within days, they form a team of criminal amateurs with just the right skills. There's Julio, a TV repair shop employee who's also an electronics expert, Rafa and Rafaela, a valet and his mechanic daughter in charge of transportation, Miguelito, a Cuban refugee actor and master of disguises, and the metro-sexual ditch digger, Anival, who plays the token heavy. None of them has ever committed a crime in their lives, but this motley crew of underdogs--so often taken for granted--is ready to face impossible odds and "receive 100 years of forgiveness." "Ladron Que Roba a Ladron" proves that being underestimated is sometimes your best advantage.

Rick Najera
as Building Guard No. 1

Jossara Jinaro
as Reporter
View All

Comic touches are obvious and broad, while helmer Joe Menendez lacks the essential energy for a vital heist entertainment.

This film is like Ocean's Eleven if directed by Robin Hood and financed by Telemundo.

The con they carefully plan is perilous and close to impossible, but the outcome is surprisingly heart-warming and satisfying.

Needlessly complicated and kind of silly.

The movie is primarily about fantasy, and everything is exaggerated to such a degree that you play along.

If you want dangerous schemes to be light-hearted entertainment, you've got to make allowances. Besides, the payoffs are worth it - in any language.

An American comedy for the other America.

Subtitled heist movie for teens and up scores.

However derivative the film may be, director Menendez and writer Henrickson infuse a zippy energy and a fair amount of personality into this tale.

While it's easy to lambaste a film that's obviously derived from an inspirational predecessor, props go to successfully advancing a U.S.-created plotline and uniquely delivering a story that stands on its own.

Lighthearted caper concerns two career criminals who assemble a hand-picked team to rob an unscrupulous millionaire. They hire immigrants they believe will be underestimated with the required skills but no criminal experience. The struggling actor, the chauffer, the television repairman, etc. It's an eclectic group. Bright, colorful production coupled with a sincere and unaffected desire to entertain. Make no mistake, this is fairly typical stuff. It kind of plays out like a Spanish language version of an American heist movie with actors from telenovelas. It's almost impossible to describe without comparing it to Ocean's 11. True, it gets a bit routine at times, but it's also extremely entertaining and in no way boring. That Hollywood series ultimately came come off as somewhat smug, particularly by Oceans 13. What makes this Mexican film with English subtitles unique is in its utter lack of pretension. The story's structure is decidedly old-fashioned. The script is definitely funny, but it never feels like it's trying hard to be hip and that sincerity is refreshing. The title, from a Latin-American proverb that translates "the thief who robs a thief earns 100 years of forgiveness".

Funny and yet brilliant robbery of a informercial guru...that deserved to get robbed. Nobody deserves it but if wrong can revenge wrong....why not go for it! Worth seeing to find out if they pull it off. Check it out.