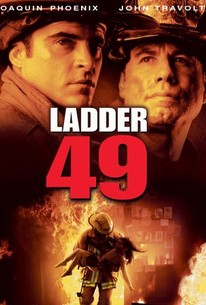 Critics Consensus: Instead of humanizing the firemen, the movie idolizes them, and thus renders them into cardboard characters.

Critics Consensus: Instead of humanizing the firemen, the movie idolizes them, and thus renders them into cardboard characters.

Critic Consensus: Instead of humanizing the firemen, the movie idolizes them, and thus renders them into cardboard characters.

Baltimore firefighter Jack Morrison, making the transition from inexperienced rookie to seasoned veteran, struggles to cope with a risky, demanding job that often shortchanges his wife and kids. He relies on the support of his mentor and captain, Mike Kennedy and his second family--found in the brotherly bond between the men of the firehouse. But when Jack becomes trapped in the worst blaze of his career, his life and the things he holds important--family, dignity, courage--come into focus. As his fellow firemen of Ladder 49 do all they can to rescue him, Jack's life hangs in the balance.

Peggy Cafferty
as Julia
View All

A serviceable testament to the firemen who would bravely risk their lives to protect the safety of others, etc., etc.

Ladder 49 might have been an oversized Hollywood dazzler. Phoenix keeps it firmly and modestly on a human scale.

Offers audiences a real rarity in theaters these days: a good, honest cry.

Even the best scenes feel canned, secondhand, packaged. We've seen this all before.

The story of Jack Morrison (Joaquin Phoenix), a guy so emotionally uncomplicated and unquestioningly dedicated to rescuing people he might have been raised by Saint Bernards.

An action drama/weepie that's so busy telling us that its characters are heroes, it forgets that they should be people first.

Gail Gilchriest's witless script leaves Phoenix with little to do but flex his muscles, while Travolta rarely steps outside the realms of cliché in his role as a supposed mentor figure.

If looked at as a tribute to our way of life, as opposed to an action blockbuster, it could resonate with audiences in a way no other film touching on the subject has to date.

Except for Jack no one else in the film is very well defined, and it often falls back onto types. The actors are good, and make the best of what they've got, but what they've got is very thin.

A fairly routine firefighter drama, with burning-building sequences that more or less all look alike.

It's slick and it honors firefighters as obviously as the first wave of WWII films paid tribute to America's fighting men and women.

All my life, I've always wondered what it would be like to work as a firefighter. The excitement, the comradery and the opportunity to save lives. There's so many things that makes it an appealing career-choice. This movie captures it all really well, and gives you a good sense of what life must be like for these every-day heroes. Through some top notch directing and the dynamic chemistry between its cast members (with Joaquin Phoenix and John Travolta at the peak of their talent), we are treated to a highly absorbing experience, filled with humor, action and intense dramatic moments. Quite sad in a lot of places, but a movie that I'm glad I gave the chance. Because what I had initially dismissed as a standard-type drama, actually had a lot more to give than I gave it credit for. So if you're gonna watch a movie about fire-fighting, this is definitely the one to go for.

A very good, action drama about the life of a firefighter seen in flashbacks. It's quite entertaining, seeing him work his way from rookie to the experienced fireman and how things change over the years. A very fine cast it has to be added and the fire, action scenes are really good. Well worth checking out.

Quite possibly the worst Joaquin Phoenix film. Ladder 49 is a crappy drama film with overused cliches and we've already seen it all before. A bad Fireman film this is just a pointless excuse for a film. I view this film as a Backdraft ripoff, it borrows from many plot elements from that film. Ladder 49 never really does anything very dramatic as it follows closely every dramatic cliche in the book, in other words; we've seen it all before. A total waste of time and definitely not a good film. A film with bad script, bad acting and bad plot, this is a film to miss.

Given what happened to the firefighters in New York after the World Trade Center attacks, it was inevitable that a film showing the heroism of firefighters would arrive on screen..i gave it a five as i found it edge of the seat stuff.. An everyday hero recalls his life as he is forced to look death in the eye in this adventure drama. Jack Morrison (Joaquin Phoenix) is a young firefighter who is a member of Ladder Company 49, led by Capt. Kennedy (John Travolta), a tough but compassionate man who looks upon his fellow firefighters as his family... well i think it is hard to make a bad fire fighter movie.. this has a real tear jerker ending...bring out the tissues on this one girls!