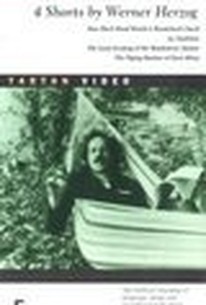 In 1977, the Caribbean island of Guadeloupe was faced with seemingly unavoidable destruction when La Soufriere, a large and active volcano on the island, came to life and was expected to explode. Guadeloupe was quickly evacuated, but one man, an elderly hermit, refused to leave his tiny campsite near the volcano, and authorities were forced to leave him behind. When filmmaker Werner Herzog heard about the lone man who stayed behind, he was instantly fascinated with his story, and quickly assembled a small camera crew to journey to Guadeloupe and get his story before the volcano destroyed the island. As it happened, Herzog and his crew discovered that three penniless men were left behind, and in La Soufriere he talks to these last citizens of Guadeloupe as they share their thoughts about their lives and their likely death. Herzog and his cameramen also include eerie footage of the abandoned city near the volcano, the dangerous beauty of the volcano itself, and the true story of a disaster which befell the island in 1902. Ironically, for all the scientific evidence of the oncoming disaster and precautions that were taken, La Soufriere failed to erupt, leading Herzog to describe the experience as "an inevitable catastrophe that didn't take place." ~ Mark Deming, Rovi

There are no critic reviews yet for La Soufrière - Warten auf eine unausweichliche Katastrophe. Keep checking Rotten Tomatoes for updates!

A volcano is about to blow. What do you do? If you're German, mad, and called Werner Herzog, you sneak around the army roadblocks and climb the volcano to film a documentary. He explores an abandoned town and speaks to some people who refuse to leave, and then...well, you'll just have to see it for yourself.

"The sea was full of dead snakes. They had crawled down during the night by the thousands from the mountain Soufriere and fled into the sea where they promptly drowned." Werner Herzog takes his documentary lens where most fear to tread, the island of Guadeloupe where a seemingly inevitable volcanic eruption has turned a once bustling city into a ghost town. Herzog shows little fear (and common sense) as he scopes out the island and it's very few remaining inhabitants. Intriguing real-life drama that, through no fault of the film makers, is happily anticlimactic.