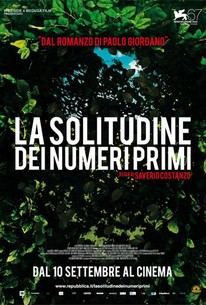 Paolo Giordano's best-selling novel is given a unique screen adaptation in this drama from director Saverio Costanzo. As Giordano notes in his book, prime numbers can only divided by one or themselves, and the two principle characters in his story reflect a similar singularity in the loneliness. As a child, Alice (Martina Albano) was forced by her father to join him for a skiing trip where she broke her leg, causing her to walk with a limp for the rest of her life. Meanwhile, Mattia (Tommaso Neri) had to attend a birthday party with his developmentally disabled sister, Michela (Giorgia Pizzo), and when he turned his back on her for a moment, she disappeared. The physical and emotional scars of these events haunt Alice and Mattia through much of their lives; while she is clearly attracted to him and their lives cross paths on a regular basis, various circumstances prevent them from coming together as a couple, as Alice becomes an assistant to a successful photographer and Mattia goes on to a distinguished career as a mathematician. La Solitudine dei Numeri Prima (aka The Solitude of Prime Numbers) was an official selection at the 2010 Toronto International Film Festival.

Giorgia Pizzo
as Michela
View All

It takes nothing away from the rest of the exemplary cast to say that Isabella Rossellini exerts her own force of gravity whenever she appears in her scalding supporting role.

...a subdued drama that's been placed within the context of an impressively epic framework...

There are no featured audience reviews yet. Click the link below to see what others say about La solitudine dei numeri primi (The Solitude of Prime Numbers)!