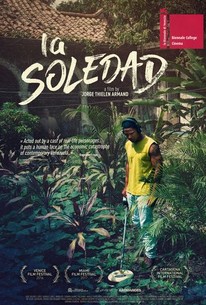 La Soledad is a dilapidated, seemingly abandoned villa in what used to be one of the wealthiest neighborhoods of Caracas, Venezuela. It used to be the home of director Jorge Thielen Armandʼs great-grandparents, but when the owners passed away fifteen years ago, the property was unofficially inherited by their lifelong maid, Rosina, now 72, who remained to care for the house and raise her grandson, José, now 27, Jorgeʼs childhood friend. Inside, antique portraits of the original homeowners still hang crookedly on crumbling walls, vegetation invades the structure of the house from all angles, and spirits eerily wander the hallways on quiet afternoons... Yet for José and his family, La Soledad is a safe-heaven in a city plagued with crime and political chaos, a quiet oasis that they are now forced to leave because the legal inheritors have decided to sell the estate. Struggling to find a solution to save his family from homelessness in a broken country, José learns of a dark secret, a desperate answer to his plight: a cursed treasure rumored to be buried in the walls of the house. The film is set in the beautiful, decaying mansion, and the characters are its real inhabitants. Capturing José's real-life hardships through a magic realist lens, La Soledad gives an unprecedented look at the economic catastrophe of contemporary Venezuela.

The debut feature from the Venezuelan director Jorge Thielen Armand, La Soledad is remarkably assured, even as it blurs the lines between fiction and reality by casting real people in not-so-real situations.

This promising debut feature opens up gradually, like a fragrant but potentially poisonous night-blooming flower.

Startling as much for its existence as for its merits.

Gains potency in the mind as a full-bodied portrait of a country in dangerous decline.

In its thoughtful, pragmatic way, La Soledad is an inventive and insightful exercise in exploring a real location down to the last cobwebbed corner. And politically, it depicts a desperate state of affairs, but with hope and quiet energy.

An extraordinary blend of documentary and fiction, a strikingly intimate, humane tale of a family, a house, and a nation. Like nothing you've seen before.

Barry Jenkins' masterful picture Moonlight followed a life across decades, and whilst Armand's is a vignette of an ongoing struggle, there is a similarly powerful emotional timbre.

The action meanders occasionally, while some of the symbolism is overloaded. But getting the film made at all in the face of increasing censorship is remarkable.

There are no featured reviews for La Soledad at this time.