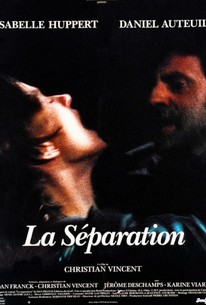 French director Christian Vincent charts the dissolution of a long-term relationship with his third film, based on the novel by Dan Franck. Daniel Auteuil and Isabelle Huppert star as Pierre and Anne, a couple who have been living together as husband and wife for several years. Although they never married, they do have a fifteen-month-old son, Loulou. One night at the cinema, Anne refuses to take Pierre's hand and the strained moment leads to her confession that she has fallen in love with another man. Although Pierre seems at first to take the news calmly, he becomes increasingly desperate and enraged as the days pass, while the distant Anne walks a fine line between embarking on a new romance and trying not to hurt Pierre too greatly. When a pair of friends, Victor (Jerome Deschamps) and Claire (Karin Viard), announce that they are finally marrying after their own years-long relationship, it sparks a final confrontation between Pierre and Anne.

Jean-Jacques Vanier
as Speaker at Party

Gérard Jumel
as Man at Party

Estelle Larrivaz
as Girl at Party

Provides and intimate and revealing anatomy of the process of decoupling.

It avoids the use of clichés.

A subtle movie in which facial expressions are where the action is.

France has been showering American moviegoers with riches since the days of silent cinema. None of this year's French offerings is more captivating than La Separation.

Modest in scope but devastating in its honesty, Vincent's observant look at a deteriorating relationship is both wise and unflinching.

There are no featured audience reviews yet. Click the link below to see what others say about La Separation!