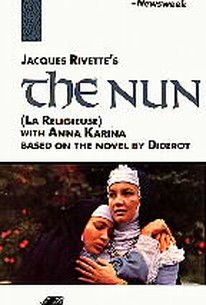 This critically acclaimed moral drama is taken from a book written in 1760 by Denis Diderot. Suzanne (Anna Karina) is an intelligent, freedom-loving woman who is forced into a convent against her will. The fact that she was sired by a man who is not her mother's husband -- and that a suitable dowry cannot be paid for her -- bring her to the church. Suzanne endures continual harassment from one Mother Superior (Micheline Presle). Transferred to a different convent, she becomes subject to lesbian leanings from another Mother Superior (Liselotte Pulver), who flees with a priest (Francisco Rabal) who says he too was forced into a life of religion. The controversial subject matter caused the feature to be banned for two years, despite assurances to director Jacques Rivette by censors. The subsequent ban helped the film (shown at the Cannes Film Festival in 1966) gain more recognition. Rivette's cynical references to Catholicism as the ultimate theater enraged the Catholic Film Office, the agency that spearheaded the opposition to the film. ~ Dan Pavlides, Rovi

In its sculptural compositions and meticulous choreography of bodies through space, it has a recognizably Rivettian formal beauty.

It writhes with almost uncontainable surges of anger, lust, and distress.

A minutely calibrated and tragic performance from Anna Karina.

A great film that remains one of the cornerstones of the French New Wave.

The French censors banned the film for over a year, thus generating both notoriety and goodwill, neither justified.

I only hope that the public is entertained and instructed by this beautiful film and not misled by its notoriety.

The story of Suzanne -- a girl rejected by her parents and victim of a sadistic nun -- doesn't begin to move us. [Full Review in Spanish]

Rivette is equally adept at showing the depth of belief of his characters and their reliance on God as he is in showing the corruption that had put a stain on such beatific belief structures.

There are no theological arguments made in La Religieuse. Suzanne's faith is firm, her Christian belief a monument to itself, given her treatment. But again, the convents serve as metaphors...

Rivette suggests that these institutions, even when their stated purposes are humble and charitable, exist first and foremost to prop each other up and form a monolith against individuals.

Neither La Religieuse nor its main character is ultimately able to see a way out of alienated individualism.

There are no featured audience reviews yet. Click the link below to see what others say about La religieuse (The Nun)!