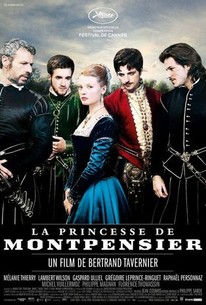 France, 1562. Against a background of the savage Catholic/Protestant wars, Marie de Mézières (Mélanie Thierry), a beautiful young aristocrat, and the rakish Henri de Guise (Gaspard Ulliel), fall in love, but Marie's father has promised her hand in marriage to the Prince of Montpensier (Grégoire Leprince-Ringuet). When he is called away to battle, her husband leaves her in the care of Count Chabannes (Lambert Wilson), an aging nobleman with a disdain for warfare. As he experiences his own forbidden desire for Marie, Chabannes must also protect her from the dangerously corrupt court dominated by Catherine de Medici. Director Tavernier translates Madame de Lafayette's 1622 novella into a bracingly intelligent and moving evocation of the terrible conflict between duty and passion. Though the themes are classic, Tavernier, with the cinematographer Bruno de Keyzer's vivid landscapes and Philippe Sarde's pulsing score, makes them feel passionately, urgently contemporary. -- (C) IFC

Everything's scenery, even the story.

Both handsomely mounted and, for the most part, rousingly acted out.

It's clear that veteran director Bertrand Tavernier has set out to show the potency and relevance of a classic love story and that period romance is by no means a dead genre. On this evidence, he has a point.

Bertrand Tavernier, in his 70th year, directs with the energy and panache of a much younger man.

It gallops along as elegantly and confidently as the horsemen we see in the opening scene - part bodice-ripper, part patrician soap opera, and part romantic tragedy - albeit a romantic tragedy of no very great resonance or depth.

The cross-vibrations between epochs are often felt, like little earth tremors. The acting is terrific.

Director Bertrand Tavernier has made a stunning film.

The Princess of Montpensier could easily have become a tedious film; however with the backdrop of the war there is plenty of action to keep you entertained.

The Princess of Montpensier is pleasant viewing that asks little of its audience.

(Bertrand Tavernier) has made an intimate epic, as coolly calculated as a chess match, in which blood on the battlefield and on the bedsheets is the fuel of economic and political power and masculine pride.

The twisting narrative is rendered skilfully so that it is easy to follow even as allegiences and alliances shift, and there is plenty of space to revel in the complexity of the characters.

Manages to be that rare thing, a thoroughly modern-seeming period film that is confident that the story it's telling is compelling enough so as not to necessitate the addition of torturous contemporary parallels.

I guess I am just a sucker for a pretty face. I quite enjoyed this, despite its shortcomings. A tragic story of a woman caught between her duty and her passion, who throws it all over for a man who proved unworthy. It also portrayed her husband as a man consumed by insecurity and jealousy. The battle scenes were brutal, the French countryside bucolic and the court intrigues just subtle enough for this viewer to find himself immersed for the more than two hours that the film ran.

Nice story. Beautifully done. However, it just goes on and on, and has one of those unsatisfying endings...2 1/2hrs is way too long to have to wait for an ending like that. Great costumes and art direction, though.

For a film which strives for "l'amour", this is a coldly directed and not sweeping enough epic with an irritating protagonist at its center. Quite frankly, one huge bore.

In "The Princess of Montpensier," the Count of Chabannes(Lambert Wilson) has finally come to his senses in 1562 to leave all the killing behind in the war between the Catholics and the Huguenots. In trying to return home, he learns the king will not have him because he was on the wrong side and the Huguenots won't have him because he deserted. So, he gets protection from an old friend(Michel Vuillermoz) where he finds a delicate domestic situation. Marie(Melanie Thierry) is horrified at the prospects at marrying Philippe(Gregoire Leprince-Ringuet), instead preferring Henri(Gaspard Ulliel) who she professes her undying love for. Somehow, her mother(Florence Thomassin) talks her down from entering a convent and the marriage goes as planned, while the consumation is another matter entirely.(Well, you try and get it up while everybody is watching.) Chabannes tags along with the couple in his role as tutor before Philippe is drafted into service to the king. Directed by Bertrand Tavernier, "The Princess of Montpensier" is a handsomely produced and engaging period piece. The strucure is a little odd at first because it starts out focusing on Chabannes before introducing the viewer to a chaotic situation all at once. While he is the most interesting character by far, he is simply an observer to everything else that goes on. And while that might seem as little more than a love triangle where everybody is at fault, it does not detract from the movie since it fits in well with the period, especially mirroring the civil war where nobody can get along with anybody else of a different background, even in an era when order and rank are preeminent and arranged marriages are accepted fact. In fact, the best that can be expected of one is peaceful coexistence and one is proposed in the movie that is very wrong on so many levels. Even with all of that said, an arranged marriage of historical fact is referenced that is intended to unite this war torn country.