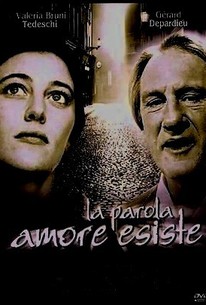 Former documentary filmmaker Mimmo Calopresti (The Second Time) made this Italian-French romantic drama that focuses on fragile and phobic 30-year-old Angela (Valeria Bruni Tedeschi). She should have a comfortable life, yet she sinks into solitude, hungers for love, can't communicate with her wealthy mother (Daria Nicolodi), and makes decisions based on various colors and numbers. Her conversations with her mother are strained and formal, so she expresses her barren existence during visits to her psychoanalyst (Calopresti), who has problems of his own. A meeting with divorced cello teacher Marco (Fabrizio Bentivoglio) sets Angela veering in another direction, one with obsessive overtones. The absent-minded Marco has his own emotional needs, and his passivity is seen in contrast to his energetic teenage daughter Malvi (Emanuela Macchniz). Making anonymous overtures to Marco, Angela sends him fragments of Japanese love poems, but he simply thinks one of his students is responsible for the notes. After an argument with her analyst upsets her, Angela's anxieties increase. She checks herself into a psychiatric clinic where she finds a friend in fellow patient Sara (Marina Confalone). Indications during a later encounter with Marco suggest the two might indeed find a connection. Once down as a producer of this film, Gerard Depardieu instead did only a brief cameo appearance in the role of a lawyer. ~ Bhob Stewart, Rovi

There are no critic reviews yet for La parola amore esiste (Notes of Love). Keep checking Rotten Tomatoes for updates!

There are no featured reviews for La parola amore esiste (Notes of Love) at this time.