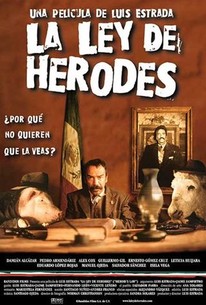 Critics Consensus: La Ley de Herodes is a biting - if heavy-handed - political satire about greed and corruption in Mexico, featuring a brilliant performance from Damián Alcázar.

Critics Consensus: La Ley de Herodes is a biting - if heavy-handed - political satire about greed and corruption in Mexico, featuring a brilliant performance from Damián Alcázar.

Critic Consensus: La Ley de Herodes is a biting - if heavy-handed - political satire about greed and corruption in Mexico, featuring a brilliant performance from Damián Alcázar.

Luis Estrada directs this groundbreaking and extremely controversial satire about Mexico's long-ruling political party, the PRI. Set in the late 1940s in the remote, thoroughly backwards village of San Pedro de los Saguaros, the film focuses on Vargas (Damian Alcazar), a petty politician who had the dubious honor of being appointed town mayor after his predecessor was decapitated for corruption by an angry mob. At first, he tries to balance the books and to bring the 20th century to the backwaters. When he is visited by slick PRI politico Lopez (Pedro Armendariz), however, he learns the officially sanctioned way of running the town: at gunpoint while pilfering the bank vaults. Soon Vargas becomes a power-mad despot, more than willing to steal or kill to further his goals. Though his PRI bosses try to reign him in, the lynch mob soon appears to be the inevitable end of Vargas' political career. The first film to criticize the PRI by name, Estrada's bitter farce savages the ruling party, the church and U.S. intervention. Cult director Alex Cox plays a small role as a seedy gringo.

Herod's Law is beautifully photographed, its imagery glazed with a sepia patina that suggests dust and neglect.

Alczar, who won the Mexican Oscar for his performance, brings a lot of energy to the role, but it's not enough to counterbalance the film's heavy-handed predictability.

Alcazar makes a deft transition from idiot to maniac, serving as an anchor for the broad performances around him.

Comes off as cartoonish drivel, broadly played and poorly written.

Half Preston Sturges and half Sam Peckinpah...though it sometimes takes its swipes with a bludgeon rather than a scalpel, it hits more often than it misses.

To connect with the story, you have to care about the victims or the character who falls from grace and unfortunately, you don't give a hot tamale about either.

Yeah, OK, we know. Absolutely power corrupts absolutely. What else?

Juan arms himself with a rewritten town constitution and a pistol. Kinky sex and ill-gotten dinero shortly follow.

Starts off with a funny, caustic humour, but the tone changes and wears off, drags, stretches in an unfunny, unsurprising second half. The idea was better than the outcome. Great leading performance.

The first movie I saw in Mexico, a good representation of the corruption of the PRI, yet again something that should be studied before watching the film. Solid satire throughout of the political atmosphere of Mexico post-WWII. Good acting, funny, and also has its fair share of violence.