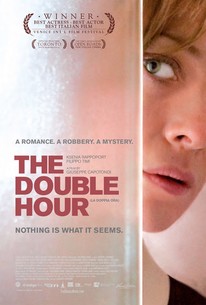 Critics Consensus: Rich in atmosphere and cunningly told, The Double Hour is a pleasurable puzzle that will keep audiences guessing throughout.

Critics Consensus: Rich in atmosphere and cunningly told, The Double Hour is a pleasurable puzzle that will keep audiences guessing throughout.

Critic Consensus: Rich in atmosphere and cunningly told, The Double Hour is a pleasurable puzzle that will keep audiences guessing throughout.

Guido (Timi), a former cop, is a luckless veteran of the speed-dating scene in Turin. But, much to his surprise, he meets Slovenian immigrant Sonia (Rappoport), a chambermaid at a high-end hotel. The two hit it off, and a passionate romance develops. After they leave the city for a romantic getaway in the country, things suddenly take a dark turn. As Sonia's murky past resurfaces, her reality starts to crumble. Everything in her life begins to change-questions arise and answers only arrive through a continuous twist and turn of events keeping viewers on edge until the film's final moments. -- (C) Samuel Goldwyn

News & Interviews for The Double Hour

View All The Double Hour News

Critic Reviews for The Double Hour

It keeps you off-balance, constantly assessing and reassessing.

"The Double Hour" is a tremendously entertaining take on film noir, with all the usual elements of the genre in play - crime, death, possibly murder and doomed romance. I think.

A twisty Italian thriller that takes some liberties with its now-you-see-'em/now-you-don't plot points, but no matter; the way director Giuseppe Capotondi keeps us guessing is deliciously, maliciously deft.

A sly, triple twist of a film, this Italian intrigue is almost never what it seems, although everything ends up making perfect sense eventually. Along the way, though, it's slippery stuff.

The neatest thing about Giuseppe Capotondi's debut feature is how it reverses the mechanics of most crime movies.

A taut and twisty thriller whose surprises genuinely surprise and whose shocks genuinely shock.

As directed by Giuseppe Capotondi with little more than a chilled eye for sleek surfaces, the rug-pulling games make for mental chewing gum that quickly loses its flavor.

While the twists and turns in "The Double Hour" indeed achieve the level of Messrs. Shyamalan and Amenábar in top form, they nevertheless reek of gimmickry.

Too many of the film's curiosities are explained away with a cliched device, but Capotondi has created an unsettling mood which creeps beneath the skin.

A modest and modestly effective Italian thriller with a supernatural twist.

Audience Reviews for The Double Hour

An intriguing foreign thriller, The Double Hour is a great mystery filled with numerous twists and turns, and although the ending is a little unsatisfying, everything that builds up to it is very suspenseful and will likely keeping guessing up until said ending.

Psychological thriller concerns Sonia, a young and pretty hotel maid who attends a speed dating event eager to meet a boyfriend. She finds one in Guido, an ex-cop-turned-security guard. They begin seeing each other. Then bad stuff happens. The way the mystery unfolds, that is, the design of this suspense puzzle is intriguing. But the specifics cannot really be discussed in much detail without spoiling the fun. Much has been made of the debt the story owes to directors like Hitchcock but this decidedly chilly thriller has much more in common with European art house pictures like "Read My Lips," and "Tell No One" than any Hollywood production. Those modern movies are good so it's definitely a compliment. However, Hitchcock's characters displayed considerably more humanity that this lot. There's an inaccessibility, a distance between them and the viewer, that prevents us from truly getting to know or understand them. Film noir, melodrama, suspense, even horror elements are all expertly crafted into an intricately woven plot that holds our attention until the very last frame. The title refers to those moments when a clock reads double digits, such as 11:11 or, in European time, 23:23. It's at precisely those minutes you are entitled to make a wish. Whether these aspirations come true is open for debate. It's an enigmatic film. One that doesn't always play fair with the audience, but thanks to the two charismatic leads, we really don't care.

★★/★★★★ In movies, as in all storytelling, a mystery is only worth our interest if it involves a juicy question worth answering. That question can be as juvenile as, who killed Mr. Body? Or as metaphysical as, what is the meaning of life? In either case, someone -- maybe Renee Descartes, maybe Scooby Doo -- is eagerly attempting to find the answer and we, the audience, are simply along for the ride. Problems arise when a story devolves into mystery for mystery's sake, and the audience is no longer vicariously following a crusader into the abyss, but kept coldly alone and in the dark, struggling for a reason to care. This is precisely the problem with the Italian romantic-thriller, The Double Hour. It begins promisingly as a tall, pretty maid named Sonia (Kseniya Rappaport) is ushered into a hotel room by its young female inhabitant. As Sonia cleans the bathroom, the young lady, without warning or reason, falls (or leaps? Or is pushed?) from the window and lies dead on a rooftop below. Why? That's a good question, and one worth answering. But The Double Hour jumps ship in a heartbeat and we find Sonia, now, relaying through sleazy creepos at a speed dating get-together. She meets Guido (Filippo Timmi) -- a gruff, unshaven behemoth of smoldering sexuality. He's the only bearable suitor, she's a melancholic sulker with low standards -- so they hit it off. Guido takes her to his country mansion/sound-studio and a gang of masked, gun-toting, burglars shoot Guido and leave Sonia for dead. When she comes to in the hospital, her world has become a haunted, unnatural place. The subsequent Rubik's Cube of a storyline -- involving hallucinations, criminal histories, leering priests and double crosses -- evoked Sherlock Holmes in its intrigue, The Double Life of Veronique in its Euro-art incoherence, Repulsion in its psychosis and even that 2001, B-movie, teen-ghoster Soul Survivors. But The Double Hour isn't a pop mystery like Holmes or even an abstract piece of European identity-loop impressionism like Veronique; it's an oddball hybrid, bleeding the lines of logic and dream, not in a fun, thrifty way, but in an indecisive kind of way. As director Giuseppe Capotondi second guesses himself again and again, his film loses its structure and its control, climaxing just passed the half-way point and leaving the audience in an insufferable 40 minute denouement. The finished film is disjointed and, when twists designed to shift our sympathies instead leave them stranded, we're left wandering the caverns of confusion alone, with no reason to care.

In "The Double Hour," Guido(Filippo Timi) is an ex-cop widower who consoles himself with hot meaningless sex and speed dating where he meets Sonia(Ksenia Rappoport), an immigrant maid, and the two hit it off. So much so, that this is the first time that Margherita(Antonia Truppo), Sonia's co-worker, can remember her smiling. And just as things are getting interesting at a chateau where Guido works as a security guard, things go sideways, then diagonally, and finally it's all squiggly lines. Let me explain. You may think you know everything as you're watching "The Double Hour" but then you'd be wrong. The movie uses its deliberate pace to lure the viewer into a false sense of security in order to subvert expectations. It was certainly not the movie I was expecting but there's nothing wrong with that. It's kind of the same way with people we first meet in that we never what to expect but certainly have our share of preconceived notions. That sort of thinking might keep you from meeting the love of your life but then forcing yourself into a relationship can be an even greater mistake. Look at Marisa(Lucia Poli) and her fake smile as she arranges the speed dates and Margherita's diastrous love life. So, it's sad that the only relationship with any chance in the movie runs head first into reality at the first opportunity.